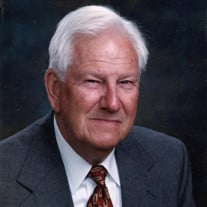 James Mathews “Jimmy” Blitch, Sr. of Statesboro, Ga. passed away Thursday morning January 20, 2022 at the age of 88. He was born in Savannah, Ga. September 10, 1933, the oldest of two children of Josie Helen Mathews and Henry Smets Blitch, Sr. Jimmy spent most of his early years in Savannah and his father moved the family back to Statesboro in 1943 to farm Blitch Place. Jimmy’s childhood home was in downtown Statesboro. Blitch Place Farms is where Jimmy grew to love the farming life and honed his skills with his father and uncle. Jimmy graduated from Statesboro High School in 1949 and entered the University of Georgia at the age of 15. He was a four-year letterman in riflery for UGA, a member of Sigma Chi Fraternity, and an ROTC cadet. He graduated with honors from the University of Georgia College of Agricultural & Environmental Sciences with a degree of Animal Husbandry and Agriscience. Upon graduation he entered the U.S. Army, as a marksman and he spent his time between Fort Jackson and Fort Benning training riflery. Upon his honorable discharge as a second lieutenant from the Army, Jimmy moved back to Statesboro to begin farming with his father. This is where he found his passion and expertise in farming and as a cattleman. Jimmy met the love of his life soon after, Patricia Ann Brannen. They were married in 1958. Blitch Place Farms is where Jimmy and Patricia built their lives and raised three daughters and a son. Their love for each other, their children, the farm and God helped guide them through the wonderful life that they shared. He was a member and deacon of First Baptist Church Statesboro, where he led a class for teenage boys and educated them on Jesus along with a little Georgia football. Jimmy loved all things University of Georgia and enjoyed his third football national championship, just 10 days prior. He was a great outdoorsman with a passion for hunting and fishing. The foundation of his life were his family, faith and farming. Patricia Brannen Blitch his loving wife of 64 years survives him. Patricia and Jimmy raised their children in a Christ centered home. He is survived by his children and their spouses who adored him: Susan B. Bozeman and Darek, Jo Helen B. Propes and Harry, James Mathews “Matt” Blitch, Jr. and Betsy and Patricia “Patty” B. Harris and Joe also survived him along with twelve grandchildren, John Bennett Bozeman and his wife Meghan, Matthew Elliott Propes, Harry Blitch Propes, Joseph Paul Propes, James Mathews Blitch III, Jonathan Henry Blitch, Tatum Victoria Blitch, Liza Harris Standridge, Charlee Grace Standridge, Sydney Drake Standridge, James Walker Harris and Samuel Phillips Harris as well as one great grand-daughter Teddi Eloise Bozeman and another great on the way. He is also survived by his only brother Henry Smets Blitch and his wife Joanna and his beloved nieces Catherine and Elizabeth and their families. Jimmy was fortunate to have so many wonderful friends, the Westside and farming communities, but also numerous cousins including Freddie Blitch, who was his constant companion. Jimmy loved and had a special relationship with every member of his family and those with whom he came in contact. He never met a stranger and he prayed fervently for everyone. Jimmy owned and operated Blitch Place Farms, a five-generation diversified farm in Bulloch County, Ga. which was founded in 1896. He worked the farm with his father and brother. His son, Matt joined the farm operation in 1988 and was thrilled when Mathew, his grandson, joined them in 2016. Jimmy’s farm currently includes a 275-head brood cow herd and Jimmy has produced through the years tobacco, wheat, oats, rye, Bahia grass, peanuts, cotton, corn, soybeans, timber, cattle and swine. He was a cowboy until the day he died as he worked and loved the cattle daily. Jimmy has spent his life helping to advance the agricultural industry, including serving as president of the Georgia Crop Improvement Association, spending 12 years on the executive board of the Georgia Peanut Commission including National research, and serving six years on the College of Agricultural and Environmental Sciences (CAES) Advisory Council. A proponent of applied research, Jimmy had been a pioneer in implementing research-based practices on his farm and others to improve crop production and strengthen agriculture. He has served on many community boards including director of First Bulloch Bank, director of the Statesboro Rotary Club, a member of the East Georgia Hospital Board of Trustees and on the First Baptist Church Board of Deacons. Jimmy helped start Bulloch Academy, where his children and many of his grandchildren attended. Among the many honors he has received are the 1963 Georgia Outstanding Young Farmer Award, 1989 Stocker-Finisher of the Year from the Georgia Cattlemen’s Association, 1990 Hayden Rogers Distinguished Agronomic Service Award from CAES, 1992 Man of the Year from the Georgia Soil and Water Conservation Commission, 2014 Outstanding Georgia Peanut Farmer of the Year and 2016 UGA Certificate of Excellence from the Master Cattlemen’s Program. In 2019, the CAES Alumni Association East Georgia Chapter honored Jimmy for his service, and most recently Jimmy was honored to receive the UGA College of Agricultural and Environmental Science Alumni Association Award of Excellence in 2020. A private family burial will take place on Sunday, January 23, 2022. The funeral service will be held at First Baptist Church in Statesboro on Monday, January 24, 2022 at 11:00 a.m. with visitation to follow. In lieu of flowers, gifts in Jimmy’s memory can be made to Young Life Gadsden, PO Box 204, Gadsden, AL 35902, UGA CAES East Georgia Chapter Scholarship, 117 Four Towers, Athens, GA 30602 or the Juvenile Diabetes Research Foundation, 200 Vessey Street, 28th floor, New York, NY 10281. Friends may sign the online register book at www.joineranderson.com Joiner-Anderson Funeral Home & Crematory of Statesboro is in charge of arrangements.

The family of Mr. James Mathews "Jimmy" Blitch created this Life Tributes page to make it easy to share your memories.

Send flowers to the Blitch family.