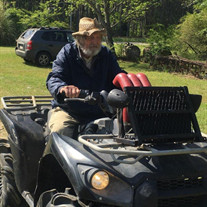 James Robert Conner, age 81, passed away on Monday, February 21, at East Georgia Medical Center. James was born on October 9, 1940, and was a life-long resident of Bulloch County. He lived his entire life on his family’s farm, where he loved farming and riding the country roads on his 4-wheeler. If James was not on his tractor or 4- wheeler, he was usually in his boat at the river. James loved sharing vegetables from his garden and fish from his fishing trips with his friends and neighbors. In his own words, he “had a good life, with some of the best neighbors anyone could ask for.” James was baptized at a young age at Leefield Baptist church. He was a graduate of Marvin Pittman School. Following graduation, he worked for many years at Rockwell and ITT Grinnell while still doing the things he loved best, which were farming and fishing. James was preceded in death by his parents, Robert L. ”Rob” and Floreid “Floree” Lee Conner, and his maternal grandparents, William E. “Willie” and Georgia Jones Lee, and his paternal grandparents, John L. “Tink” and Mary Lou Conner. He was also preceded in death by his best friend and fishing buddy, Gene Peacock, who James referred to as “Pop” and who, in return, nicknamed James “Lucky” because of his luck in usually catching the most fish. Surviving is James’ only son, Jimmy E. Conner (fiance’, Brenda Bragg Morrow), one granddaughter, Lynn Conner Ranew (husband Brandon) and three great-grandchildren, Alexia Powell, Robert Rogers and Mason Ranew. The family will receive visitors on Thursday, February 24th from 5:00pm until 7:00pm at Joiner-Anderson Funeral Home in Statesboro. The funeral will be held on Friday at 2:00pm, in the chapel of Joiner-Anderson Funeral Home in Statesboro with Lavonne Deal officiating. Interment will be in Eastside Cemetery. Pallbearers will be: Robert Rogers, Brandon Ranew, Arthur Allen, Jr., David Mincey, Joe Perkins and Toby Conner. Honorary pallbearers are Jimmy Edenfield, Doy Edenfield, Randy Waters and Keith Waters. Contributions may be made to the American Cancer Society, 428 Bull St Unit 205, Savannah, GA 31401. Friends may sign the online registry at www.joineranderson.com Joiner-Anderson Funeral Home & Crematory of Statesboro is in charge of arrangements.

James Robert Conner, age 81, passed away on Monday, February 21, at East Georgia Medical Center. James was born on October 9, 1940, and was a life-long resident of Bulloch County. He lived his entire life on his family&#8217;s farm, where he... View Obituary & Service Information

The family of Mr. James Robert Conner created this Life Tributes page to make it easy to share your memories.

Send flowers to the Conner family.