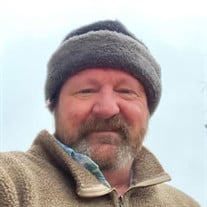 Statesboro, Georgia Mr. James Stacy Lanier, age 52, died Tuesday at the East Georgia Regional Medical Center in Statesboro. The Lord called Stacy home to build something special for all in Heaven. Stacy was born in Statesboro, Georgia in 1969. He was a 1987 graduate of Bulloch Academy where he excelled in athletics. He was recently inducted into the Bulloch Academy Athletic Hall of Fame. Following his graduation Stacy attended Georgia Southern University and later started Lanier Mill Works, that he owned and operated until his death. Stacy had a God-given talent of working with wood and was known for his attention to detail in each and every job that he had. He had attended Crossroads Community Church in Statesboro. Stacy enjoyed woodwork, hunting and fishing; his greatest love was that of his family and especially the time spent with his nephews. He was preceded in death by his father, Doy Franklin Lanier; his paternal grandparents, John R. and Lucille Lanier and his maternal grandparents, Margaret Rowland and James Roy Miller. Surviving are a son, Leyton Lanier of Richmond Hill; Leyton's mother Kandi Lanier of Midway, GA; his mother, Lois Lanier of Statesboro; two brothers and sisters-in-law, Jeff and Janet Lanier and Tim and Sonya Lanier all of Statesboro and sister and brother-in-law, Vickie and Gid Smith of Pooler. Many nieces, nephews and extended family also survive. The family will receive visitors on Friday January 28, 2022 from 2:00pm until 3:00pm in the chapel of Joiner-Anderson Funeral Home. Funeral services will follow the visitation at 3:00pm in the funeral home chapel with Pastor Carey Swanson officiating. Interment will be in Bulloch Memorial Gardens. Pallbearers will be his nephews and nieces, Taylor Lanier, Cody Lanier, Will Smith, Tripper Smith, John Curtis Lanier, Kacie Lanier and Shelby Lanier. The family requests that memorial contributions be made to Ogeechee Area Hospice, P.O. Box 531, Statesboro, Georgia 30459. Friends may sign the online register book at www.joineranderson.com. Joiner-Anderson Funeral Home & Crematory of Statesboro is in charge of the arrangements.

The family of Mr. James Stacy Lanier created this Life Tributes page to make it easy to share your memories.

Send flowers to the Lanier family.