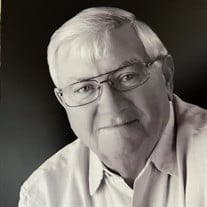 James G. (Casey) Rogers left the earth peacefully Tuesday evening, Nov. 2, 2021. He and his loving wife Adelia were watching the 9th inning of the Atlanta Braves game as they were winning the World Series. He spent his entire life in service to others. Casey was a 1968 graduate of Reidsville High School, joined the United States Air Force, and served in Vietnam. He went on to graduate from Swainsboro Tech College as well as South Georgia College with a degree in Criminal Justice. Casey retired from the Georgia State Patrol as well as the United States Air Force Reserve. Since then he was part of the Beaver Creek Plantation team. Casey was a loving husband, Father, and PaPa and his void will never be filled. He is a member of Trinity Baptist Church in Nevils, Georgia. Casey had a love for hunting and was a member of the "Kill em’ All" hunting club. He always said he was doing his part to keep you safe on the highways. He was known as Taz to his fellow Troopers, but to his family he was "The Energizer Bunny" and also "Mr. Fixit" and could and would tackle anything with great success. He was preceded in death by his parents, Marion and Earnest Rogers, his Brother, David Rogers all of Cobbtown, Georgia, and his sister, Betty Ruth Aldrich, Metter, Georgia. He leaves behind his high school sweetheart and loving wife of 51 years, Adelia M. Rogers, a son J. Patrick Rogers, of Statesboro, Georgia, a daughter Nikki Roessler of Freeport, Florida, three grandchildren, Scott James, Savannah and Sierra of Freeport, Florida, and a brother, Walt Rogers (Debbie), Reidsville, Ga. The family will receive visitors on Saturday from 10:00am until 11:00am at Trinity Baptist Church in Nevils, GA. A memorial service will follow at 11:00am with Pastor Joe Eason officiating. Honorary pallbearers will be his fellow Georgia State Patrol officers as well as members of Beaver Creek Plantation. The family requests that any memorial contributions be made to Trinity Baptist Church, 1172 Nevils Denmark Rd, Nevils, GA 31321. Friends may sign the online register book at www.joineranderson.com Joiner-Anderson Funeral Home & Crematory of Statesboro is in charge of arrangements.

James G. (Casey) Rogers left the earth peacefully Tuesday evening, Nov. 2, 2021. He and his loving wife Adelia were watching the 9th inning of the Atlanta Braves game as they were winning the World Series. He spent his entire life in service... View Obituary & Service Information

The family of Mr. James G. "Casey" Rogers created this Life Tributes page to make it easy to share your memories.

Send flowers to the Rogers family.