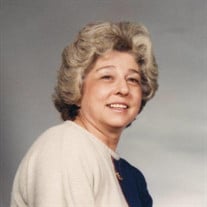 Statesboro, Georgia Mrs. Janie Lue Staggs, 84, passed away peacefully on December 26th, 2020 from having contracted the Covid-19 Virus at East Georgia Regional Hospital in Statesboro, Georgia. She was born in Mendes, GA on August 24th, 1936 to Jim Crosby and Sally Dubberly Crosby. She attended and graduated from Tattnall County public schools in Glennville, GA. Following graduation, she served a short enlistment with the United States Navy. It was during her enlistment in Jacksonville, FL that she met and married her husband Bobby Staggs. They were married on December 10th, 1955 in Folkston, GA and recently celebrated 66 loving years of marriage. After her discharge, Bobby continued to pursue his career in the Navy and she traveled with him from the East Coast to the West Coast as far as Hawaii. During which time she raised four children. Upon Bobby’s retirement they first settled in Claxton, GA where she worked at Evans Memorial Hospital. They moved twice more, first to Brunswick, GA and then to Statesboro, GA where she worked and retired from Sea Island Bank. Janie had a beautiful smile and lived her life with intent, whether it was in her home, work, cooking, baking or community. She was a member of the Ladies Auxiliary of the American Legion Post #90 where she served for many years and two as President. She loved to read, she enjoyed watching Pro/College football, and she loved to travel, but especially loved her family. She never cared about being in the spotlight but was eager to shine it on others. She was born and lived a humble life, believing in God and prayer. She was preceded in death by both her parents, Jim and Sally Crosby, two sisters Anna Bell Klein and Betty Nell DeLoach, brothers-in-laws; Leon DeLoach, Bob Hemphill, Sonny Staggs, Don Staggs, Buddy Staggs, Gary Staggs, Ralph Prance, two sisters-in-laws; Betty Prance, Judy Wallace, and one nephew Jimmy DeLoach. Her life will be forever cherished by her survivors. She leaves behind a loving husband, Bobby Staggs. Four children; Donna McElveen, Delena Staggs, Stephen Staggs (Nancy Guarino), Stacey Staggs (Rowena). Grandsons, Marshal Jones (Corinna), Colt Staggs, Thomas Staggs, Robby Staggs, Gunner Staggs, Travis Givens, Ryan Hart and Johnathon Hart. Granddaughters, Jessica Burkett (Ben), Angie Hart and Ashlee Hart along with ten great grandchildren. In addition, her sister, Esther Hemphill, her sister-in-laws, Glenda Womble (Billy), Patsy Fike (Allen), Susie Butterworth, Sherrie Kirkland (Scott), Shirley Staggs (Sonny), Sherry Staggs (Buddy) along many nieces and nephews. A private family service will be held on Monday, January 4, 2021 at 4:00pm at the Georgia Veterans Memorial Cemetery in Glennville, Georgia. Those wishing to send cards, flowers or sympathy gifts may send them to 106 Springdale Rd Statesboro, Georgia, 30458. Friends may sign the online register book at www.joineranderson.com. Joiner-Anderson Funeral Home & Crematory of Statesboro is in charge of arrangements.

The family of Mrs. Janie Lue Crosby Staggs created this Life Tributes page to make it easy to share your memories.

Send flowers to the Staggs family.