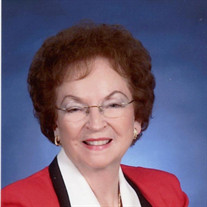 Statesboro, GA Mrs. Jeanette Amelba Cribbs Griffin Martin, age 79, born March 16, 1941, passed away on Sunday February 14, 2021 after a long illness at the Ogeechee Area Hospice Inpatient Facility. She was preceded in death by her beloved husband, Colan Francis (Buck) Martin; beloved son, Richard Nugent Griffin; and parents, Harmon G. Cribbs, Sr., and Lora Hayes Cribbs; one brother, Harmon G. Cribbs, Jr.; and baby sister, Ilent Antionette Cribbs. She was a native of Bulloch County and lived in the Stilson Community for 23 years before moving to Chatham County. She moved to Pooler in 1972 and lived there for 29 years. She was a member of First Baptist of Pooler and served as assistant teacher of Ladies Sunday School Class for many years and served on several committees. She was educated in the public schools in the Bulloch County and was a 1959 honor graduate from Southeast Bulloch School. She received a Bachelor of Science in Education degree from Georgia Southern College in 1963 and received a Master of Education from Georgia Southern University in 1989. While attending Georgia Southern University, she was a member of Pi Omega Pi, National Business Fraternity. Mrs. Martin was a full-time instructor for 32 years at Savannah Technical College. She was also an adjunct instructor for Savannah Technical College for six years and three years as an online instructor. During her teaching career, she also served as Department Head, advisor for Phi Beta Lambda, and on many committees. During her career she was a member of National Association of Educators, Georgia Association of Educators, Chatham Association of Educators, American Vocational Association, and Georgia Vocational Association for many years. She was a member of Georgia Business Education Association for many years and First District Director of GBEA for two years. She was selected by one or more students for excellence as a distinguished educator in Who’s Who Among Teachers in 1996. Truly teaching was her calling-her favorite pastime as a child was “teaching” her dolls. She was very committed, devoted and loyal to teaching. In 2001, she and her husband built a home at Stilson and lived there the remainder of their lives. They enjoyed the relaxed atmosphere in her home community. She enjoyed playing the piano. She loved working in the beautiful flowers, until her health failed. She enjoyed seeing and hearing birds sing. Reading the Bible gave her courage and strength. Word search books were a favorite pastime. She also loved and enjoyed her little dogs. She was a member of Old Fellowship Baptist Church for many years and served as a teacher of the Mamie Woodward Sunday School class and member of WOM where she served on the decorating committee sometimes as chairman. Her faith, devotion and love for her Savior and Church helped her through life and especially through many difficult times. Her Pastor and Church family were very special to her. She is survived by: two step-daughters: Bobbi M. Mackay of Roswell, GA, and Jennifer M. Kicklighter of Atlanta, GA; one step son Jeffery Martin of Anderson, SC. Mrs. Martin has eight step-grandchildren: Natalie M. Harger, Renee’ M. Konig (Stefan), Barrett Mackay, Ansley K. Allen (Tim), Andy Kicklighter, Chelsea Walden, Tanner Martin and Abigal Martin; and three step-great grandchildren, Quinn and Owen Allen and Pierce Koenig. She is survived by four sisters-in-law: Inez Martin of Pooler, GA, Idell M. Ray of Bloomingdale, GA Ellen M. Stafford of Augusta, GA, and Ann M. Bashlor (Jimmy) of Baxley, GA; She is survived by a special cousin, Glennis Jackson of Brooklet, GA, a sister-in-law, LaVone Brown of Brooklet, GA; a niece, Jeanne Cribbs Marsh of Brooklet; and one great –niece, Sydney Marsh Lewis of Portage, MI; and several cousins. A visitation will be held Wednesday, February 17, 2021 at 1:00 p.m. until 2:00 p.m. at Old Fellowship Baptist Church followed by the funeral service at 2:00 with Dr. Tony Lambert officiating. Interment will be in the church cemetery. Pallbearers will be Billy Haas, Clinton Lee Jackson, Michael Mashburn, Dana Sanders, Luke Williams and Donnie Williams. Honorary pallbearers will be the members of the Mamie Woodward Sunday School Class and the Southeast Bulloch High School class of 1959. The family requests that memorial contributions be made to Old Fellowship Baptist Church Building Fund, 5526 U.S. Hwy 80 East, Brooklet, GA 30415; or to Ogeechee Area Hospice, P.O. Box 531, Statesboro, GA 30459. Friends may sign the online register book at www.joineranderson.com. Joiner-Anderson Funeral Home & Crematory of Statesboro is in charge of the arrangements.

The family of Mrs. Jeanette Amelba Cribbs Griffin Martin created this Life Tributes page to make it easy to share your memories.

Send flowers to the Martin family.