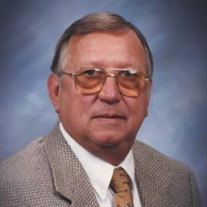 Statesboro, Georgia Mr. Jerry Kyle Rushing, Sr. age 83, died Saturday, December 19, 2020, at the Ogeechee Area Hospice Inpatient Facility in Statesboro. Jerry was born in Register, Georgia in 1937 to Otis and Bonnie Lou Futch Rushing. He was a 1955 graduate of Marvin Pittman Laboratory School in Statesboro and attended and graduated from North Georgia Trade School on a Basketball Scholarship. He then began his employment with Ryder Trucking Company in Hazelhurst, Georgia where he worked for several years and later with Braswell Foods. Jerry then began his career with Cal-Maine Foods, where he worked for 15 years prior to starting his own company J.V. Inc, a trucking company, which he owned and operated until his retirement. He was a member of the Statesboro Primitive Baptist Church. Jerry was preceded in death by his parents, Otis Rushing and Bonnie Lou Futch Rushing. Surviving are his wife of 62 years, Rose Martin Rushing of Statesboro; two sons and daughters-in-law, Kyle and Kathy Rushing of Register and Marty and Candace Rushing of Register; his grandchildren, Haley and Kevin O’Grady of Martinez, Matt Rushing and his fiancée Kirby Southerland of Savannah, Lawson Rushing of Statesboro, Will Rushing of Statesboro, Morgan Bowen of Chattanooga, TN and Thomas Bowen of Statesboro; two great grandchildren, Jack O’Grady and Ellie Rose O’Grady and a brother and sister-in-law, James and June Rushing of Statesboro. The family will receive visitors on Tuesday December 22 from 10:00am until 11:00am in the chapel of Joiner-Anderson Funeral Home in Statesboro. Funeral services will be held at 11:00am Tuesday in the chapel of Joiner-Anderson Funeral Home with Elder Randy Waters officiating. For those desiring to view the services via livestream may do joining the group “Joiner-Anderson Live Stream” at https://www.facebook.com/groups/jafhlive/. Interment will be in the Eastside Cemetery in Statesboro. Pallbearers will be his grandsons and grandson-in-law, Matt Rushing, Lawson Rushing, Will Rushing, Thomas Bowen and Kevin O’Grady and Ron Rushing. The family requests that memorial contributions be made to Ogeechee Area Hospice, P.O. Box 531, Statesboro, Ga. 30459 or St. Jude Children’s Research Hospital at 262 S. Danny Thomas Blvd, Memphis , TN 38105 or at www.stjude.org or Statesboro Primitive Baptist Church, 4 South Zetterower Ave. Statesboro, Georgia 30458. Friends may sign the online register book at www.joinernaderon.com. Joiner-Anderson Funeral Home & Crematory of Statesboro is in charge of the arrangements.

The family of Mr. Jerry Kyle Rushing Sr. created this Life Tributes page to make it easy to share your memories.

Send flowers to the Rushing family.