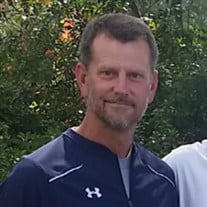 Jim “Slim” Simmons, age 56, passed away with his wife and children by his side on Friday, March 12, after a courageous battle with bladder cancer. He was born in Atlanta, GA on July 17, 1964 to Anne Jordan Simmons and the late Dr. William Crawford “Doc Whit” Simmons. He graduated from Lakeside High School in 1982. He then moved to Statesboro to attend Georgia Southern College where he played baseball and earned his Bachelor of Science in Education. Jim was a history teacher and coached baseball and softball, originally at Effingham County High School from 1990 - 2005 and more recently at Statesboro High School from 2006 - 2020. His teaching and coaching were not confined to the classroom and ball fields. These were his passion, not just his avocation. He touched the lives of so many students, even into adulthood, and his indelible touch will be missed. Slim, as he was known by his friends and family, edged, honed, and sculpted the lives of the students entrusted to his care with the same energy and devotion he committed to maintaining the ball fields. When the cancer, which was thought to be in remission, ultimately returned, it took Slim from us but it never defeated him. He would want his students, his friends, and his family to remember that he never gave up. He said during a recent trip to the Augusta Cancer Center, that he knew this was “an uphill battle”. “But they keep score in those too!” There was no “quit” in Jim Simmons. Survivors include his loving wife of 32 years, Lisa Bunting Simmons, son and daughter-in-law: Crawford and Meredith Simmons, daughter: Addison Simmons, and grandson: Seth James Simmons. He is also survived by his mother: Anne Jordan Simmons of Dublin, GA and brother: Will Simmons of Charleston, SC., in-laws: Steve and Linda Schwartz and Jim and Kathy Wolff, brother-in-law: Chris Bunting (Nikki), sister-in-law: Lauren Bunting Rose, very special cousin: Bryce Bunting (Mandy), nieces and nephews: Josh Bunting (Emily), Mason Bunting, Madison Bunting and Jett Rose. The family will receive friends Thursday, March 18, at Joiner-Anderson Funeral Home from 5:00pm-7:00pm. The service will be held Friday, March 19, at 11:00am in the sanctuary of Pittman Park United Methodist Church with Pastor Brandon Williams officiating. The body will lie in state one hour prior to the service. For those unable to attend, a live-stream of the service will be available at the following links: https://vimeo.com/event/807674 https://youtu.be/w2crwag_wpk Pallbearers will be Greg McMullen, Craig Cooper, Ed Williams, Rich Kinzler, Dave Shannon, Jody Slater, Jimmy Alexander, and Brett Griffin. A heartfelt thank-you to the AUH medical teams of Dr. Parikh and Dr. Terris, along with his “girlfriends” at the AUH Cancer Center and the angels at Ogeechee Area Hospice. In lieu of flowers the family requests that memorial contributions be made to one of the following groups: ECHS Baseball Boosters, ECHS Softball Boosters (1589 Highway 119 South, Springfield GA 31329) SHS Baseball Boosters, or SHS Softball Boosters (10 Lester Road, Statesboro GA 30458) Friends may sign the online register book at www.joineranderson.com Joiner-Anderson Funeral Home & Crematory of Statesboro is in charge of arrangements.

Jim &#8220;Slim&#8221; Simmons, age 56, passed away with his wife and children by his side on Friday, March 12, after a courageous battle with bladder cancer. He was born in Atlanta, GA on July 17, 1964 to Anne Jordan Simmons and the late Dr.... View Obituary & Service Information

The family of Mr. Jim "Slim" William Simmons created this Life Tributes page to make it easy to share your memories.

Jim “Slim” Simmons, age 56, passed away with his wife and children...

Send flowers to the Simmons family.