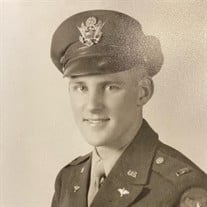 Brooklet, GA Mr. John Fisher “Jack” Lammey, age 97, died on Sunday April 17, 2022 at Southern Manor Retirement Inn. Jack was born October 10th, 1924. He is originally from Kennett Square, Pennsylvania. Jack would often go with his father, a “Telephone Person” to service phones when he was younger. Jack attended Penn State but was called away to active duty in the United States Army where he served as a pilot flying B24 bombers during World War II, he flew 29 missions and was stationed in the Philippines. Following his service, he returned and graduated from Penn State with a BS in Engineering. He went to work with the DuPont Chemical Company where he worked in Pennsylvania and Charlotte NC he retired after 40 years of service as a salesman. Following retirement, he lived in Isle of Palms SC and later enjoyed their cabin on the Ogeechee River in Bulloch County. He was a member of the Isle of Palms First United Methodist Church. Jack enjoyed fishing, golfing duck hunting and reading history novels. Surviving is his wife of 35 years Martha Edenfield Lammey of Isle of Palms, SC and Stilson, GA; five daughters Diane Gibson of Pittsburgh, PA, Karen (Sam) Register of Raleigh, NC, Debbie Jeffers of Orange Park, FL, Elizabeth (Jason) Botts of Ladsen SC and Faith (Wendell) Vincent of Summerville, SC; one son Don Findley of Troy, MI; 11 grandchildren and 11 great grandchildren also survive. A memorial service will be held on Thursday April 21, 2022, at 2:00 at Old Fellowship Baptist Church in Brooklet GA with Dr. Tony Pagliarullo, the family will receive friends following the service. A memorial service will be held on Friday, April 22, 2022 at 2:00 pm at the Isle of Palms First United Methodist Church with Rev. Dr. Laura Parrish officiating. The family requests that memorial contributions be made to Old Fellowship Baptist Church 5526 E. Highway 80, Brooklet, GA 30415 or to the Isle of Palms First United Methodist Church, 12 21st Ave, Isle of Palms, SC 29451. Friends may sign the online register book at www.joineranderson.com. Joiner-Anderson Funeral Home & Crematory of Statesboro is in charge of the arrangements.

The family of Mr. John "Jack" Lammey created this Life Tributes page to make it easy to share your memories.

Send flowers to the Lammey family.