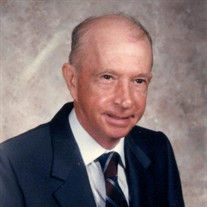 Statesboro, Georgia Mr. Johnny Leon Dixon, passed away on November 22, 2020, at Ogeechee Area Hospice Inpatient Facility in Statesboro, Georgia. He was 101. He was born in Blackshear, Georgia on May 29, 1919, the eldest child of George and Mary Dixon. He was raised in Pierce County and graduated from Blackshear High School in 1939. Johnny served in the United States Navy during World War II from September 1941 to January 1945. He was stationed in Washington, D.C. at the Navy I.D. Bureau. When he was sixteen, he began to give thought to how he would make his way in the world. He saw an advertisement in “True Detective Magazine” for a course of study in The Science of Fingerprint Identification at the Institute of Applied Science in Chicago, Illinois. He enrolled in this course in 1935 and completed it in 1937. He paid for the course with wages he earned working after school at the Royal Theater in Blackshear. In 1937 he read an article in the newspaper stating that the State of Georgia was establishing a Department of Public Safety and that was the path he resolved to follow. In 1938 he wrote to the City of Savannah requesting permission to work in the identification Bureau of the Detective Department at the Savannah Police Department for a couple of days a week for three months to gain experience. His request was granted by the Mayor of Savannah. Johnny made application to the department of Public Safety (Georgia State Patrol/ Georgia Bureau of Investigation) in Atlanta, Georgia and began his career there on July 1, 1940. He helped set up the Identification Bureau in the GBI, and later became Chief of the Identification Section. In 1952, he went out into the field as a Supervisory Field Agent. Over the years he was called back to HQ several times to serve as Deputy Director and as Acting Director. He retired in February 1974. After his retirement he began raising camellias on the land around his home in Pierce County. He was a member of the Emmanuel Baptist Church for many years and served as a deacon. He was preceded in death by his wife of 70 years, Alene Howard Dixon; his parents, George Dixon and Mary Hickox Dixon; his brothers, Dewey Dixon, Willie Dixon, George Dixon, Carl Dixon, and Morris Dixon; and his sister, Mary Jeanette Ware. He is survived by his daughter, Amanda Dixon Stone (William) of Statesboro; his grandson Dr. John W. Stone (Christy) of Newnan; and his great granddaughters, Kathryn Grace, Caroline, and Claire; his brother, Ralph Dixon of Hinesville; his nieces and nephews, several of whom followed him in public service. He also leaves behind three sisters-in-law and many nieces and nephews in his wife’s family, all, all whom he lived among and loved and was loved in return by them. Private services will be held at Joiner-Anderson Funeral Home in Statesboro with Reverend Jimmy Cason officiating. The family wishes to thank the staff of Ogeechee Area Hospice for their compassion and dedication. It is requested that memorial contributions be made to them at P.O. Box 531, Statesboro, Georgia 30459. Friends may sign the online register book at www.joineranderson.com. Joiner-Anderson Funeral Home & Crematory of Statesboro is in charge of the arrangements.

Statesboro, Georgia Mr. Johnny Leon Dixon, passed away on November 22, 2020, at Ogeechee Area Hospice Inpatient Facility in Statesboro, Georgia. He was 101. He was born in Blackshear, Georgia on May 29, 1919, the eldest child of George and Mary... View Obituary & Service Information

The family of Mr. Johnny Leon Dixon created this Life Tributes page to make it easy to share your memories.

Send flowers to the Dixon family.