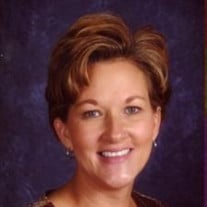 Karen Glover Martin entered into eternal rest on January 1, 2022 after an extended illness. She was born on January 20, 1963 in Savannah, Georgia. Karen is survived by her husband, John, her two sons, Eli and Colton Hodges, Statesboro, GA. her mother, Irma Glover, Statesboro, and her sister Susan Glover, Pooler, GA, daughters Johnna Sweat (Nick) Sandersville, GA, Ansley Shedd (Kyle) Brooklet, GA and Dalice Martin, Brooklet, GA, granddaughters Mary Margaret Shedd and Annie Sweat, alone with countless friends. Karen was preceded in death by her father, Russell Glover. After being born in Savannah, near the ocean, she was all about sunshine, the beach and the ocean. Her personality reflected her love for life and everything nautical. The sun was her favorite thing mirroring her sunny disposition. Another passion was traveling, both domestic and foreign. She relocated to Bulloch County after earning a degree in Math from Georgia Southern University, followed by a teaching certificate. That certificate gave her ability to enlighten the minds of her students. She dedicated twenty plus years teaching to beloved children at Stilson Elementary where she earned the distinguished Teacher of the Year Award. The funeral will be a graveside at Greenwich Section of Bonaventure Cemetery in Thunderbolt on January 5, 2022 at 2pm with Mr. Jach Martin officiating. The funeral is open to anyone who wants to attend. Mask are requested to be worn by all attendees. In lieu of flowers, donations can be sent to Ogeechee Area Hospice P.O. Box 531, Statesboro, GA 30459 or to the Brooklet United Methodist Church – Youth Department 201 Parker Ave. Brooklet, GA 30415. Friends may sign the online register book at www.joineranderson.com Joiner-Anderson Funeral Home & Crematory of Statesboro is in charge of arrangements.

Karen Glover Martin entered into eternal rest on January 1, 2022 after an extended illness. She was born on January 20, 1963 in Savannah, Georgia. Karen is survived by her husband, John, her two sons, Eli and Colton Hodges, Statesboro, GA. her... View Obituary & Service Information

The family of Mrs. Karen Glover Martin created this Life Tributes page to make it easy to share your memories.

Send flowers to the Martin family.