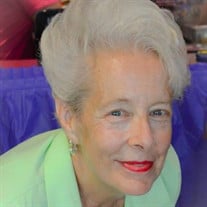 Statesboro, Georgia Mrs. Kathryn Elizabeth Owens Tankersley, 78, passed away on Friday, April 2, 2021, at the Ogeechee Area Hospice Inpatient Facility in Statesboro, Georgia. Because He Lives, Kathryn is alive, full of joy and life, and has seen her Savior. Kathryn was born on March 1, 1943, in Hickory, NC. Her family moved to Statesboro when she was in the 9th grade. In a world history class, she met the man with whom she would fall in love and marry, Hubert P. Tankersley, Jr. They were married for 47 years before Hubert’s death in October 2012. Kathryn graduated from Statesboro High School in 1961 and from Georgia Southern College in 1964. Kathryn dedicated her life to supporting Hubert as he served in various educational positions and faith communities in Bulloch County. For thirty-four years, Kathryn loved serving at Emit Grove Baptist Church in many capacities. She directed the choir, played the piano, and taught Sunday School. Her love of music and teaching Sunday School continued when she attended First Baptist Church Statesboro. Kathryn was well known for her skills in the kitchen. She enjoyed baking bread, cakes, and delicious home-cooked meals for her family and many others that she loved. Kathryn enjoyed caring for young children and it was during this time that she was given the love name, “KaKa”. This moniker continues to be used by her family. She was preceded in death by her beloved husband, Hubert Pierce Tankersley, Jr.; a half-sister, Iris Bolick; a brother, Jefferson Edward Owens, Jr.; a nephew, Jefferson Edward Owens, III; and her parents, Jefferson Edward Owens, Sr. and Ethel Keith Owens. She is survived by a son, Hubert Pierce "Tray" Tankersley III, his wife, Alicia, of Marietta, Georgia; a daughter, Kelly Elizabeth Tankersley, her husband, Chris Cuddington, of Brooklet, Georgia; two grandchildren, Mary Elizabeth Tankersley and William Pierce "Will" Tankersley of Marietta, Georgia. She is also survived by two sisters and brothers-in-law, Louise Patterson and Joe of Duluth, Georgia; Margie Case and Jack of Ellijay Georgia; a sister-in-law, Mima Hart Owens of Statesboro, Georgia; several nieces and nephews also survive. The funeral service will be Sunday, April 11, at 2 p.m. at the Statesboro First Baptist Church with Dr. John Waters officiating. The family will receive friends following the service. A private graveside service and burial will be held at Bulloch Memorial Gardens, prior to her funeral service. The family requests that in lieu of flowers memorial contributions be made to Ogeechee Area Hospice, P.O. Box 531, Statesboro, Ga. 30459; or First Baptist Church Ministry of the donor's choice, 108 North Main Street, Statesboro, Ga. 30458. Friends may sign the online register book at www.joineranderson.com. Joiner-Anderson Funeral Home & Crematory of Statesboro is in charge of the arrangements.

Statesboro, Georgia Mrs. Kathryn Elizabeth Owens Tankersley, 78, passed away on Friday, April 2, 2021, at the Ogeechee Area Hospice Inpatient Facility in Statesboro, Georgia. Because He Lives, Kathryn is alive, full of joy and life, and has... View Obituary & Service Information

The family of Mrs. Kathryn Elizabeth Owens Tankersley created this Life Tributes page to make it easy to share your memories.

Send flowers to the Tankersley family.