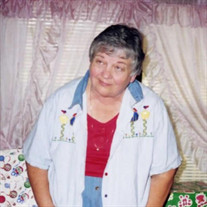 Portal, Georgia Mrs. Kay Rackley Newton, age 83, died Tuesday September 22, 2020, at the Ogeechee Area Hospice Inpatient Facility in Statesboro. The Portal, Georgia native was the daughter of the late Herbert and Martha Johnson Rackley. Kay was a 1955 graduate of Portal High School. Following graduation, Kay attended Radiology and Nursing School. She later married Bobby Ronald Newton, Sr. and traveled with him throughout his military career for 20 years. Once the two returned to Bulloch County, Kay worked with Georgia Southern College for many years. Kay was most happy being a homemaker and cooking and caring for her family and friends. She was a member of the Portal Historical Society where she had served as President and was very active in organizing the annual Turpentine Festival. Kay was a member of the Red Hat Society and volunteered many years as a poll worker. She was of the Baptist faith. Kay was preceded in death by her husband, Bobby Ronald Newton, Sr. and her parents. Surviving are a son and daughter-in-law, Ronny and Jennifer Newton of Statesboro; two daughters and a son-in-law, Wanda and Guy Sharp of Nevils and Sandy Teems of Portal; her grandsons, Jason Cooper, Jeremy Teems, Chase Newton, Cody Cooper, Chan Newton, and Wayne Sharp; four great grandchildren; a brother-in-law and two sisters-in-law, Gene and Barbara Newton of Atlanta and Leola Newton of Statesboro. Several nieces and nephews also survive. The family will receive visitors on Thursday from 5:00pm until 7:00pm at Joiner-Anderson Funeral Home in Statesboro. Funeral services will be Friday at 11:00am in the chapel of Joiner-Anderson Funeral Home with Elder John Scott officiating. Interment will be in the Portal City Cemetery. Pallbearers will be her grandsons. Honorary Pallbearer will be Jeremy Teems. The family requests that memorial contributions be made to Ogeechee Area Hospice, P.O. Box 531, Statesboro, Georgia 30459. Friends may sign the online register book at www.joineranderson.com. Joiner-Anderson Funeral Home & Crematory of Statesboro is in charge of the arrangements.

The family of Mrs. Kay Francis Rackley Newton created this Life Tributes page to make it easy to share your memories.