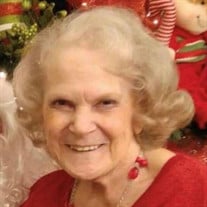 Statesboro, Georgia Ms. Lillian Tate Hendry, age 85, passed away on Wednesday March 3, 2021, at the Gardens at Southern Manor, under the care of Regency SouthernCare Hospice. The Colonial Beach, Virginia native resided in Myakka City Florida, and Arcadia, Florida before moving to Statesboro in 1991. Following her move to Statesboro Lillie began working with her sons in their businesses, Jimbo’s Junction and Factory Tire Outlet. She later worked for the Georgia Department of Labor for several years. She had been a resident of the Gardens at Southern Manor since 2016. Lillie was preceded in death by her parents, James Henry Tate and Virginia Catherine Thompson Tate; a brother, James Tate and two sisters, Evelyn Marcey and Dorothy Ebert. Surviving are three sons and a daughter-in-law, Jimbo Hendry of Statesboro; Bruce Hendry of Statesboro and Donald and Terri Hendry of Statesboro; a daughter and son-in-law, Patty and Larry Hendrickson of Sarasota, FL; seven grandchildren; many great grandchildren and a sister, Helen Dent of Sarasota, FL. The family will receive visitors on Thursday March 4, 2021 from 5:00pm until 7:00pm at Joiner-Anderson Funeral Home in Statesboro. An additional visitation will be on Saturday March 6, from 10:00am until the funeral hour at Bethany Baptist Church , 26604 St. Rd 64 East, Myakka City, Florida. Funeral services will be at 11:00am at Bethany Baptist Church with Rev. Ricky Dyal officiating. Interment will be in the church cemetery. Pallbearers will be Trey Turner, Ronnie Hendry, Billy Wayne Hendry, Ryan Clark and Scott Foxworthy. Friends may sign the online register book at www.joineranderson.com. Joiner-Anderson Funeral Home & Crematory of Statesboro is in charge of the arrangements.

The family of Ms. Lillian Tate Hendry created this Life Tributes page to make it easy to share your memories.

Send flowers to the Hendry family.