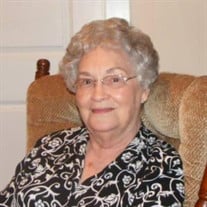 Statesboro, Georgia Lois Riggs Deal, age 91 died Sunday, November 8, 2020 at Southern Manor under the care of Ogeechee Area Hospice. She was born November 16, 1928 in Candler County to the late Dan Riggs and Shellie Mae Shelton. She was raised in Metter, Georgia and graduated from Metter High School. Lois married John Edwin Deal and was his faithful partner until his death. Together they owned and operated a convenience store in the Middleground Community and later opened a store on Joe Hodges Hill. She was later employed by J.C. Penney in the lingerie department and was well known and loved by her customers. She was a faithful member of Eastern Heights Baptist Church. Her health prevented her attendance in recent years, but she loved her Sunday School friends and teachers and appreciated their love and support. She was happiest when spending time with her family and being on the go after retirement. She especially loved spending time in Augusta with her cousin and with her brother, Jerry, and family in Edgefield, South Carolina. Her grandchildren and great grandchildren kept her young and active for many years. She enjoyed watching movies, traveling, going out to eat, getting her hair and nails done and going to auctions! She was preceded in death by her husband, John Edwin Deal, three siblings, Maude Lee Riggs, Harold Riggs and Jerry J. Riggs, and a loving nephew Jerry “J.J.” Riggs, Jr. She is survived by her children, Bob (Lyn) Deal, Gail (Howard) NeSmith, John Edwin Deal, Jr., and Craig (Sharon) Deal. Grandchildren Jay (Amy) Deal, Amy (Chad) Deal, Ginger (Jon) Willoughby, Kris (Billy) Blythe, Lauren (Matt) Rogers, and Matt Deal. 10 Great Grandchildren Dillon & Bea Deal (Jay), Max & Everett Deal (Amy), Tyler & Luke Willoughby (Ginger), Finley & Sydney Blythe (Kris) , and Tess & William Rogers (Lauren). She is also survived by her sister-in-law- Fran Riggs and two nieces Terry Riggs (Jim) Deal and Sharon “Shay” Riggs. The service will be held on Friday, November 13, 2020 at Joiner-Anderson Funeral Home with viewing at 10:00 am and service at 11:00 am. Masks are required by the family and social distance will be practiced. Interment will be a private family gathering at Eastside Cemetery. The family would like to express a very special thank you to Ralph Cowart and Alan Skipper for their excellent leadership and to the dedicated staff of Southern Manor. We will be forever grateful to all of you for your wonderful care and love shown to our mother and grandmother. Memorial contributions may be made in her memory to Ogeechee Area Hospice, P O Box 531, Statesboro, Georgia 30459. Services are streamed using Facebook Live through a private group. Only members of the group will be able to view the service. In order to view the service, log into Facebook on your phone or computer and join the group “Joiner-Anderson Live Stream” at: https://www.facebook.com/groups/jafhlive/ Friends may sign the online register book at www.joineranderson.com Joiner-Anderson Funeral Home & Crematory of Statesboro is in charge of arrangements.

The family of Mrs. Lois Riggs Deal created this Life Tributes page to make it easy to share your memories.

Send flowers to the Deal family.