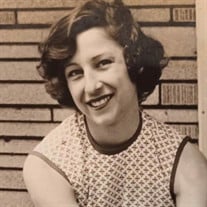 Lorraine Joyce Szrama (Lori) of Statesboro, Georgia (formerly of Cape Coral, Florida) passed away peacefully with family by her side on February 22, 2022 at Southern Manor Senior Living Facility. Lori was born on March 12, 1929, in Poughkipsie, New York, to Francis Rhodes Gencel and John P. Gencel. While most northerners wait for grey hair and at least one hip replacement to move to Florida, Lori took off to the Gulf Coast right after high school and started waitressing at a cafe on St. Petersburg Beach. There, she met David Karl Swinehart, Sr. He said to her "Where'd you get those beautiful blue eyes, Angel?" to which her response was to promptly marry that handsome young man and have his four children: David Karl Swinehart, Jr., Mark P. Swinehart, Angela T. Swinehart, and Leonard J. Swinehart. For a short time, she was a switchboard operator and worked for the St. Petersburg telephone company. It didn't take long for her to leave the working world to care for her children; she absolutely loved her family. She also loved pinching sprigs of plants off at nurseries and putting them in her purse to plant at home later to avoid paying for landscaping. She loved to paint and crosstitch, winning many awards at numerous state fairs and competition for her outstanding talents. She also loved to go bowling, winning not a single award with an average of 89, but having a blast with friends anyway. Later on in life she really enjoyed spoiling her grandchildren. She took them fishing and taught them card games. She made them ice cream sundaes and showed them the art of swiping salt and pepper shakers from restaurants. She enjoyed a beer on ice almost as much as she enjoyed a republican win in the general election. She is preceded in death by her first husband and father of her children, David Karl Swinehart, Sr., her second husband Robert Szrama, her beloved son, David Karl Swinehart Jr., and her brother John P. Gencel. She is survived by her children Angela Daughtrey (Troy), Mark Swinehart (Teresa), and Leonard Swinehart, her grandchildren Lindsay McCoy (Casey), Jacob Daughtrey (Sasha), LaNieka Swinehart, John Swinehart, and Rhonda Swinehart, five great grandchildren, numerous nephews, and many caring friends that became her family at Southern Manor. In a surprising turn of events, she has chosen to pass up one last opportunity for attention and has requested no funeral or memorial services be held. She will be content with her ashes scattered on that same beach in Florida - where those that were closest to her also rest. In lieu of flowers, donations or memorial contributions may be made to Regency Southern Care Hospice, 325 S Main St, Statesboro, GA 30458, or St. Jude's Children's Hospital at www.stjude.org/donate, or to the charity of your choice. Friends may sign the online register book at www.joineranderson.com Joiner-Anderson Funeral Home & Crematory of Statesboro is in charge of arrangements.

Lorraine Joyce Szrama (Lori) of Statesboro, Georgia (formerly of Cape Coral, Florida) passed away peacefully with family by her side on February 22, 2022 at Southern Manor Senior Living Facility. Lori was born on March 12, 1929, in Poughkipsie,... View Obituary & Service Information

The family of Mrs. Lorraine "Lori" Joyce Szrama created this Life Tributes page to make it easy to share your memories.

Send flowers to the Szrama family.