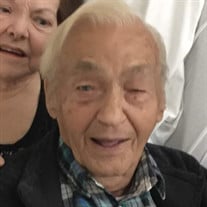 Statesboro, Georgia Mr. Louis Talmadge Anderson, age 91, died Saturday March 20, 2021, at Browns Health and Rehab under the care of Regency SouthernCare Hospice. The Bulloch County native had an excellent talent for selling cars, which led him to own and operate several used car lots over his career. Additionally, he owned and operated several service stations in Statesboro. Later in his career, he worked with Franklin Chevrolet, Curtis Youngblood Ford and Everett Motor Company and was also a school bus driver with the Bulloch County Board of Education. For several years, Louis was a resident of Camden Place and since June of 2020 he had been a resident of Browns Health and Rehab. The family would like to thank the staff of these facilities, for the excellent care that he received during his stay. Louis was known for telling jokes and his goal was always to make people smile. He loved Bluegrass Music and Nascar. He was a member of First Baptist Church of Statesboro. Surviving are a daughter and son-in-law, Glenda and Glenn Rogers of Statesboro; a son and daughter-in-law, Anthony and Nancy Anderson of Richmond, Virginia; five grandchildren, Kelly Nelms (Lamar) of Athens, Brent Rogers of Statesboro, Megan Livingston (David) of Richmond, VA, Blaine Anderson (Rebecca) of Charlottesville, VA and Kyle Rogers of Statesboro; two sisters-in-law, Hilda Cannady of Statesboro and Mickey Davis of Rincon; six great grandchildren and many nieces and nephews. The family will receive visitors on Monday from 5:00pm until 7:00pm at Joiner-Anderson Funeral Home in Statesboro. Graveside services and burial will be Tuesday at 2:00pm at Bulloch Memorial Gardens with Elder Mike Newman officiating. Pallbearers will be Brent Rogers, Kyle rogers, Barry Anderson, Lamar Nelms, Andy Hendrix and Darrell Anderson.

The family of Mr. Louis Talmadge Anderson created this Life Tributes page to make it easy to share your memories.

Send flowers to the Anderson family.