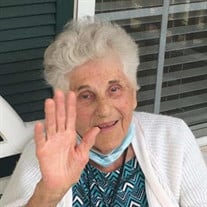 Mrs. Marion Joyce “Joe” Bell Volf, 86, passed away at her residence on March 13, 2021 under care of Ogeechee Area Hospice. She was born on May 8, 1934 in Jenkins County, and raised by her mother and adopted father, Lila Lord Lane and Jack Lane. She served as a Certified Dietary Manager at several locations throughout her career. She was an active member of the Union Baptist Church where at various times she served as song leader, choir member, Sunday School and Vacation Bible School teacher. She is preceded in death by her parents, her husband, Jesse “Thomas” Bell, Sr., her second husband, Tony Volf, her son, Joseph Richard “Ricky” Bell, and her brother, Dick Lord. She is survived by her two sons and their spouses, Jesse Thomas “Tommy” (Laura) Bell, and William Douglas “Duggie” (Regina) Bell, both of Halcyondale, GA, grandchildren; William Douglas “Buddy” (Nikki) Bell, Jr., Cristian Bell, both of Sylvania, Katelyn Bell (Leon) Yates, and Matthew Bell, both of Halcyondale, and several nieces and nephews. Graveside services will be held on Monday, March 15, 2021, at 1:00pm with Rev. Al Rusher officiating, assisted by Pastor Vernon Edenfield. Pallbearers will be Buddy Bell, Matthew Bell, Leon Yates, Craig Steinhaus, Herman Holland, Ernie Campbell, and Phil Lee. Honorary pallbearers will be all members of the Union Baptist Church. The family would like to extend their special thanks to the staff of Ogeechee Area Hospice, and in lieu of flowers they ask that memorial contributions be made to the hospice at; Ogeechee Area Hospice, P.O. Box 531 Statesboro, Georgia 30459. Friends may sign the online register book at www.joineranderson.com Joiner Anderson Funeral Home Screven Chapel is in charge of all arrangements.

The family of Mrs. Marion Joyce "Joe" Bell Volf created this Life Tributes page to make it easy to share your memories.