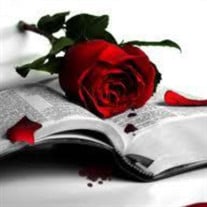 Millen, Georgia Mrs. Marsha Sapp Jackson, age 68, died Thursday April 7, 2022, at Bethany Home in Millen, Georgia. The Bulloch County native was a 1971 graduate of Statesboro High School. Marsha lived in Statesboro and Portal for many years before moving to Millen in 1995. She married Joey Jackson in 1972 and was an accountant and owned MJ’s Tax Service for many years, additionally she was a homemaker who enjoyed caring for her family. Marsha was of the Baptist faith and in her early years, attended Bible Baptist Church in Statesboro. Her greatest joy was her family and the time spent with her children and grandchildren. She was preceded in death by her parents, Willie Edgar Sapp and Dorothy McCarty Sapp; a brother, Timothy McCarty and her father-in-law, Doughty Jackson. Surviving are her husband of 50 years, Joey Jackson of Millen; two daughters, Amanda Marie Cail of Millen and Amy Latrelle Capwell of Hawaii; two sons and a daughter-in-law, Michael Andrew and Tonya Jackson of Portal and Zachery Dalton Green-Jackson of Millen; six grandchildren and a great grandchild, expected soon; two brothers and sisters-in-law, Buddy and Carol Sapp and Ricky and Robin Sapp all of Statesboro and her mother-in-law, Nellie Jackson of Portal. The family will receive visitors on Saturday from 5:00pm until 8:00pm at Joiner-Anderson Funeral Home in Statesboro. Graveside services and burial will be Sunday at 3:00pm at Payne’s Chapel United Methodist Church Cemetery with Rev. Donald Combs officiating. Pallbearers will be Hunter McCormick, Zachery Green-Jackson, Riley Jackson, Morgan Jackson, John Lanier and Richard Lastinger. The family requests that memorial contributions be made to the Masonic Home of Georgia,1417 Nottingham Drive, Macon, Georgia 31211 or St Jude’s Children’s Research Hospital at stjude.org or by mail at 501 St. Jude Place, Memphis, TN 38105. Friends may sign the online register book at www.joineranderson.com. Joiner-Anderson Funeral Home & Crematory of Statesboro is in charge of the arrangements.

The family of Mrs. Marsha Sapp Jackson created this Life Tributes page to make it easy to share your memories.

Send flowers to the Jackson family.