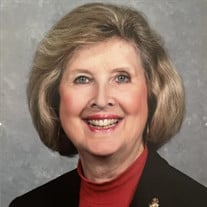 Martha Brantley Bacon, age 83, passed away peacefully in her home on February 20, 2022 after a courageous battle against Parkinson’s disease. Martha was born in Johnson County, GA on April 20, 1938 to William Riley Brantley and Susie Mae Colston Brantley. She graduated as valedictorian from Wrightsville High School in 1956. While in high school she played basketball and was selected “Miss Wrightsville High” in her senior year. She was a master 4-H-er, winning a trip to Chicago with her bread-making project. Martha earned a BS Degree from Georgia Teachers College (now Georgia Southern University) where she was a cheerleader for the men’s basketball team. Martha and her late husband, Albert Sidney Bacon, Jr., lived in Charlottesville, VA for 16 years before moving to Statesboro in 1983. In Charlottesville, she managed their family owned Kentucky Fried Chicken business and earned her license in real estate. Back in Statesboro, Martha became very active in the Georgia Southern Alumni Association, serving on their Board of Directors for 6 years. She organized and started a reunion of the “East Hall Girls” which meets annually on campus. She and Linda Aycock owned and operated the Plunderosa on Savannah Avenue for almost 20 years. Martha was a member of the Statesboro First Baptist Church in the Alathean Sunday School class. In addition to her parents, she was preceded in death by her husband of 44 years, Albert Sidney Bacon, Jr., her brother Jim Roe Brantley, and dear friend Norris Strickland. Those left to cherish her memory are her beloved sons, Albert Sidney Bacon, III (Janice) and Gregory Riley Bacon (Sally); grandchildren, Dylan Bacon, Carrie Bacon, Sarah Bacon Daniels (Neco), and Sydney Bacon; great grandchildren, Cameron Daniels, Carter Daniels, and Speir Blocker; brother, Riley Brantley (Diane) of Lyons, GA; sisters Angelyn Sims Price (Bennie) of Fort Valley, GA and Judy Brantley Washburn (Gary) of Chatsworth, CA; and several dear cousins and nieces and nephews. The family would like to express their deep appreciation to Mrs. Wyomia Timmons for her loving care of Martha for the past several years. A graveside service will be held Friday, February 25, 2022 at 11:00am at Northside Cemetery in Pembroke, GA with Elder Kurt Bacon officiating. In lieu of flowers, donations may be made to the Nursing Ministry at the First Baptist Church of Statesboro. Friends may sign the online register book at www.joineranderson.com Joiner-Anderson Funeral Home & Crematory of Statesboro is in charge of arrangements.

Martha Brantley Bacon, age 83, passed away peacefully in her home on February 20, 2022 after a courageous battle against Parkinson&#8217;s disease. Martha was born in Johnson County, GA on April 20, 1938 to William Riley Brantley and Susie Mae... View Obituary & Service Information

The family of Mrs. Martha Brantley Bacon created this Life Tributes page to make it easy to share your memories.

Martha Brantley Bacon, age 83, passed away peacefully in her...

Send flowers to the Bacon family.