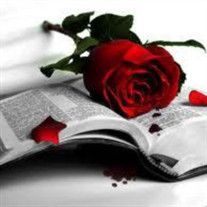 Statesboro, Georgia Mrs. Martha Ann Rountree, age 66, died Sunday morning, November 7, 2021, at East Georgia Regional Medical Center surrounded by her family. A resident of Bulloch County, Martha Ann was the daughter of the late Charles and Ann Lewis of Wrens, Georgia. Martha Ann was a homemaker, wife, and mother to four daughters; all of which kept her on the go, a little bit worried, and entertained. She was a member of Eastern Heights Baptist Church, where she enjoyed serving in the children’s ministry for many years and later on participating in the Senior Adult Ministry. Early on, she also enjoyed caring for many young children in her home. Martha Ann loved her family and friends, and she enjoyed spending her time with them. She is preceded in death by her husband, William Christopher Rountree, and one brother, Greg Lewis of Wrens. Surviving are four daughters and one son-in-law; Katie Rountree and Christina Rountree of Statesboro, Chase and Bessie Sconyers of Metter, and Mary Ann Rountree of Stone Mountain; two grandchildren, Christopher Payton Sconyers and Ann Marie Sconyers of Metter; one sister, two brothers, one brother-in-law and one sister-in-law, Rocky and Charlotte Gilmore of Louisville, Billy Lewis of Wrens, Buster Lewis of Stapleton, and Kathy Lewis of Wrens; and several nieces and nephews. The family will receive visitors on Friday, November 12 from 1:00pm until 3:00pm at Eastern Heights Baptist Church in Statesboro. Funeral services will be held immediately following visitation at 3:00pm in the gym of Eastern Heights Baptist Church with Senior Pastor, Nicky McCreary officiating. The family requests that memorial contributions be made to Eastern Heights Baptist Church, 23805 U.S. Highway 80 East, Statesboro, Ga. 30461 or the Alpha-1 Foundation. This foundation is committed to finding a cure for Alpha-1 Antitrypsin Deficiency, the genetic disorder Martha Ann was diagnosed with over the last few years. Friends may sign the online register book at www.joineranderson.com Joiner-Anderson Funeral Home & Crematory of Statesboro is in charge of the arrangements.

The family of Mrs Martha Ann Rountree created this Life Tributes page to make it easy to share your memories.

Send flowers to the Rountree family.