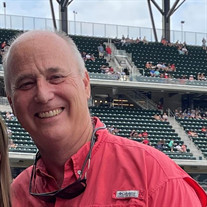 Statesboro, Georgia Mr. Marty Simon Williams, age 59, died Sunday April 17, 2022, at Emory University Hospital in Atlanta. Marty was born in Metter, Georgia and raised in Pulaski, Georgia. He was a 1980 graduate of Metter High School and a graduate of Georgia Southern University with a Bachelor’s degree in Industrial Technology. Marty worked with Lynn Manufacturing in Pulaski for over 30 years and was currently employed with Global Framing. He also operated a home design business, Diamond Designs. Marty was a lifelong member of Pulaski Baptist Church, where he served as a deacon, music leader and former Sunday School teacher. Marty loved God, Family and the church. After fulfilling these obligations, he enjoyed a ballgame. He was an avid softball player and spent many days locally and nationally playing softball at a high level. As Georgia Southern developed their athletic program he supported both the football and basketball program. He carried his family and mother to many games. He leaves behind a big family and many friends who considered him the ultimate “Good Guy”. He was preceded in death by his father, James Lamon Williams. Surviving are his wife, Julie Hess Williams of Statesboro; two daughters, Ashley and Emily Williams both of Statesboro; his mother, Hazel Sapp Williams of Pulaski; two brothers and sisters-in-law, Kelly and Julie Williams and James and Anne Williams all of Pulaski; two sisters and a brother-in-law, Terry and Marty Franklin of Pulaski and Marie Cushner of Statesboro; his mother in-law and father-in-law, Billy and Emma Hess of Cobbtown and a brother-in-law and sister-in-law, Greg and Dee Dee Hess of Birmingham, AL. Many nieces and nephews also survive. The family will receive visitors on Tuesday April 19, 2022, from 5:00pm until 8:00pm at Joiner-Anderson Funeral Home in Statesboro. Funeral services will be Wednesday at 11:00am at Pulaski Baptist Church with Rev. Andrew Huffingham, Rev. Jake Johnson and Rev. Tony Dye officiating. The body will lie-in-state one hour prior to the services. Interment will be in Lake Primitive Baptist Church Cemetery. Pallbearers will be his nephews, J. Franklin, Foss Williams, Joseph Cushner, Douglas Cushner, Will Cushner, Kelly Williams, II, and Christopher Williams. Honorary Pallbearers will be the men of Pulaski Baptist Church, Kelly Lanier, Chris Chance and Tommy Jordan. The family requests that memorial contributions be made to Pulaski Baptist Church, P.O. Box 113 Pulaski, Ga. 30451. Friends may sign the online register book at www.joineranderson.com. Joiner-Anderson Funeral Home & Crematory of Statesboro is in charge of the arrangements.

The family of Mr. Marty Simon Williams created this Life Tributes page to make it easy to share your memories.

Send flowers to the Williams family.