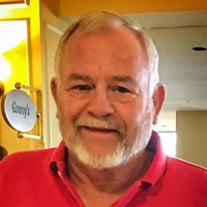 Mr. Marvin Albert “Marty” Lee, 68 of Sylvania passed on Sunday, December 19, 2021 at the Memorial Health University Medical Center surrounded by his loving family. A Screven County native reared in the Greenhill Baptist Church where he was a lifetime member, he was a graduate of Screven County High School. He was a machinist, radiator specialist, and small business owner of Lee’s Radiator Shop. Upon graduation from high school, he attended and obtained an associate’s degree in Atlanta. From there, he brought an addition to the family business of mechanical repair, including cylinder and head repair, all the while employed with Stuart’s Auto Parts. In 1990 with the passing of his father, he assumed full operation of the family business. He was revered for his boiled peanuts that he grew and harvested as a hobby to gift his friends. He was his grand’s greatest fan at their sporting events, and was a diehard Atlanta Braves and Georgia Bulldogs fan. In his younger days he frequented a many a NASCAR race. He was a former member of the Spring Lake Hunting Club and later established his own hunting club. Marty will be remembered by his friends for his knack for entertaining, whether singing, harmonica playing, or just a quick witted joke and by his children for the inherited love of music, especially country. He was preceded in death by his parents, M.P. “Bo Knocker” and Mildred Juanita Brown Lee; and sister, Penny Juanita Lee. He is survived by his children; Mandi Lee & Jack Gross of Kingsland, GA, Kylie Lee & Johnathan Forehand, and Kevin & Vette Rountree, all of Sylvania, grandchildren; Tanner Forehand, Camdyn Forehand, Lanie Gross, and Jackson Gross; special Friend, Debra Godbee of Sylvania; and special aunts and uncles. Memorial services will be held Thursday, December 23 at 5:00pm at the Screven Chapel of Joiner Anderson with Rev. Kevin Rountree officiating. The family will receive friends for two hours prior at the funeral home from 3:00 to 5:00pm. Honorary pallbearers will be Lowell Hagan, Kent Strickland, Dougie Teston, Ted Lee, Jimmy Thompson, Eddie Harley, Don Colbert, Boykin Stuart, Jimmy Kimbrell, and Keith Quick. As a participant in organ donation to save lives, memorial contributions may be made in his name to the LifeLink Legacy Fund at https://secure.donorpro.com/lifelink. Lastly, the family would like to express gratitude to the physicians, nurses, and staff of the Trauma ICU of Memorial Health University for their care during this most difficult past week. Friends may sign the online book at www.joineranderson.com Joiner Anderson Funeral Home Screven Chapel is in charge of all arrangements.

The family of Mr. Marvin Albert "Marty" Lee created this Life Tributes page to make it easy to share your memories.

Send flowers to the Lee family.