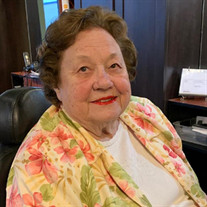 Obituary Mary Jane Kinney Hay Mrs. Mary Jane Kinney Hay, age 91, passed away peacefully, on Tuesday, September 29th, 2020 at East Georgia Regional Medical Center in Statesboro under the care of Ogeechee Area Hospice. She was born January 19th, 1929 in Atlanta where she graduated from Girls’ High School. She met her husband Arthur Lee Hay there at First Baptist Church Atlanta. They were later married on February 4th, 1951 and moved to Savannah where they were members of Bull Street Baptist Church and charter members of Memorial Baptist Church. Mary and Arthur were married 67 years until his passing on July 27th 2018. Arthur and Mary lived in Savannah over 50 years and Mary was the owner of La-Z-Boy Furniture Galleries for many of those years. In addition to raising three children and having a successful business she was active in many civic and social clubs including Altrusa Club International of Savannah, The Huntingdon Club, and the Daughters of the American Revolution, Bulloch Chapter. She was past president of the Savannah Home Furnishings Association and a director on the Georgia Home Furnishings Association. Arthur and Mary moved to Statesboro in 2007 and was a current member of First Baptist Church in Statesboro. She is survived by her three children; Brenda Hay O’Quinn and husband Jack (deceased), Michael Arthur Hay wife Jane, and Richard Byron Hay wife Hannah. She also has four grandchildren, and three great-grandchildren. Mary was from a large family of ten children of which two are still living, LaValle Merrifield of Atlanta and Peggy Sue Webb of Colorado. She also has numerous nieces and nephews. Her strong Faith in her Lord and Savior, her love for her husband, and all her family, friends and loved ones was always her priority in life. She will be missed dearly by all of us until we meet again. A graveside service and burial will be held on Saturday, October 3rd at 11:00am at Eastside Cemetery with Dr. John Waters, pastor of First Baptist Church Statesboro, officiating. Mrs. Hay requested that remembrances be given to the music ministry of First Baptist Church Statesboro where she loved the music. Friends may sign the online register book at www.joineranderson.com Joiner-Anderson Funeral Home & Crematory of Statesboro is in charge of arrangements.

The family of Mrs. Mary Jane Kinney Hay created this Life Tributes page to make it easy to share your memories.

Send flowers to the Hay family.