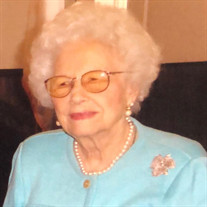 Mary Wilma Evans Wells, 97, passed away peacefully at home Sunday, August 22, 2021 – one month before her 98th birthday. A Christian, southern lady, she believed strongly in the ideals of family, God, church and country. At the time of her death, she was the oldest matriarch of the William Ellison Evans Family. She was born and raised on the ancestral farm, existing today. She is preceded in death by her parents, Willie Wood Evans and Lena Brantley Evans, husband of 38 years, Horace V. Wells, and sister, Wilene E. Rickert. After graduation from Newington High School, she acquired her Bachelor of Arts degree from Tift-Mercer University. She also attended University of Mary Hardin Baylor in Belton, TX and Georgia Southern University. In her early years, she was a high school English and Government teacher. She was a Vice President and Board Director at the Bank of Newington for 57 years until her death. She was quite an advocate of this hundred-year-old family business. She cherished North Newington Baptist Church. In 1993, when the church was 200 years old, she served as chairman of the year-long celebration. At the time of her death she was the oldest and longest standing member of the church. She was a long-time music director, having enjoyed choral presentation all during her college career. For many years, she taught the young adult Sunday school class, and served as secretary and treasurer of the Women’s Missionary Union. She was a charter member of the Screven County Historical Society and was a generous promoter of many worthwhile causes. Survivors are two daughters, Margo W. Metts and Lynn W. (Harry Jr.) Sheppard of Newington, one grandson, Tripp Sheppard of Sylvania; a granddaughter, Evan Sheppard (Allan) Scott of Savannah; and great-grandchildren, Harper and Parker Sheppard of Sylvania. She is also survived by brother-in-law, Don Wells of Atlanta; niece, MerriLyn R. Sease of Chapin, SC great-nephew, Russel (Jaclyn) Sease of Prosperity, SC; great-niece, Angela (Zeb) Reid of Newberry, SC; and several great great nieces and nephews. The family wishes to thank her long-term handyman, Isaac Williams, and her recent caregiver, Louise Anderson. The funeral will be held at North Newington Baptist Church, on Wednesday, August 25 at 11:00 AM with Rev. Slade Speir officiating. Burial will be held at North Newington Cemetery. COVID-19 restrictions will be in effect. Pallbearers will be T.W. Evans, Jr., William Tebeau, Trey Thompson, Lindy Sheppard, Lamar Zipperer, Davy Wells, Jon Burns, Mike Evans, Gene March, and Bill Smith. In lieu of flowers the family asks that donations be made to the North Newington Baptist Church, P.O. Box 236, Newington, GA 30446. Friends may sign the online register book at www.joineranderson.com Joiner Anderson Funeral Home Screven Chapel is in charge of all arrangements.

Mary Wilma Evans Wells, 97, passed away peacefully at home Sunday, August 22, 2021 &#8211; one month before her 98th birthday. A Christian, southern lady, she believed strongly in the ideals of family, God, church and country. At the time of... View Obituary & Service Information

The family of Mrs. Mary Wilma Wells created this Life Tributes page to make it easy to share your memories.

Send flowers to the Wells family.