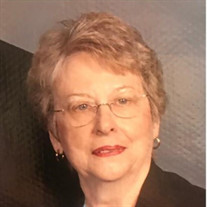 Marybeth Wildes Sapp age 86, of Statesboro passed away at Candler County Hospital in Metter, Georgia on Sunday, August 8, 2021. Mary was born in 1934, the third of ten children born to the late Charles Edward and Editha Boyette Wildes. She was born and raised in the Hillview Community of Tattnall County, Georgia, in the same house where her father was born 27 years earlier. Mary attended Hillview School grades one through nine and then went to Collins High School, Collins where she graduated in 1951. Mary was employed by Southern Bell Telephone Company from 1952-1954, and then was employed as a secretary at Claxton High School and then at Georgia Southern College. In January 1969, she was employed by Dabbs, Hickman, Hill & Cannon, CPAs as a secretary and retired in June 1994 after 25 years of employment. She was a member of the Statesboro Primitive Baptist Church and the Cora Williams Circle. She married Jimmy Elton Sapp on December 3, 1953 and they were blessed with 59 years together until Jimmy’s death in 2013. In addition to her husband and parents, she is predeceased by her infant granddaughter, Sarabeth Sapp; sister, Carolyn Wildes Smith Boyett; brother, Martin Thomas Wildes; and brothers-in-law, James Benjie Smith and Carl D. Lacy. She is survived by her son, Jerry Elton Sapp and wife Patia of Claxton; one granddaughter, Jennifer A. Sapp; three grandsons, Jared Elton Sapp (Talia), Adam Rodgers Sapp all of Statesboro and Austin Robert Johnson of Walls, MS; four great grandchildren, Morgan Rebecca Griffin, Niven Claire Griffin, Violet Georgiana Sapp and Vincent Jared Sapp; and former daughter-in-law, RaDonna Rodgers Sapp all of Statesboro. Also surviving are her four sisters: Norma Wildes of Statesboro, Martha Lacy of Gatesville, Texas, Faye K. Smith (Alton) and Kaye Wildes (Durell Lynn) of Metter; three brothers, Farrell Wildes (Jan) of Ringold, Jay Wildes (Julia) of Claxton, and Vann Wildes (Marilyn) of Hotchston; brother-in-law, Jack Boyett of Collins and sister-in-law, Sarah Lynn Sapp of Lyons. She was “Aunt Mary” to many nieces and nephews from her Wildes and Sapp families. A private family funeral is being held for the immediate family where she will be laid to rest beside Jimmy at Brewton Cemetery, Hagan, Georgia. In lieu of flowers, remembrances may be made to Statesboro Primitive Baptist Church, 4 South Zetterower Avenue in Statesboro, GA 30458 or The Georgia Eye Bank, Inc., 5605 Glenridge Drive, Suite 250 in Atlanta, GA 30342. Friends may sign the online register book at www.joineranderson.com. Joiner-Anderson Funeral Home and Crematory of Statesboro is in charge of the arrangements.

Marybeth Wildes Sapp age 86, of Statesboro passed away at Candler County Hospital in Metter, Georgia on Sunday, August 8, 2021. Mary was born in 1934, the third of ten children born to the late Charles Edward and Editha Boyette Wildes. She... View Obituary & Service Information

The family of Mrs. Marybeth Wildes Sapp created this Life Tributes page to make it easy to share your memories.

Marybeth Wildes Sapp age 86, of Statesboro passed away at Candler...

Send flowers to the Sapp family.