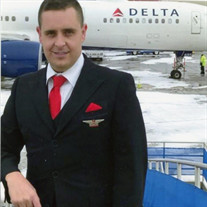 Bay District – Bulloch County Mr. Matthew Douglas Swint, age 35, died Tuesday February 16, 2021, in Salt Lake City, Utah. Matt was born in Savannah and raised in the Bay District of Bulloch County. He graduated from Southeast Bulloch High School in 2004. Following graduation, Matt worked with Dorsey Tire. With a constant desire to work, Matt began his career with Delta Airlines working as a bag handler and with dedication to his job , he had worked into the position of Lead Flight Attendant. Additionally, Matt had worked with the Effingham County Sheriff’s Office, Newington Police Department and had graduated from Ogeechee Technical College. He currently worked part time with the Brooklet Police Department and with Curtron removal and transport company in Statesboro and volunteered as a fire fighter at the Bay District Fire Department. Matt was preceded in death by his father, Mitchell Douglas Swint; his paternal grandparents, A.J. and Susie Swint and his maternal grandfather, Russell T. Poole. Surviving are his mother, Polly Poole Swint of Bay District; a brother and sister-in-law, Nicholas Mitchell and Holly Swint of Sylvania; a niece Taylor Rebecca Swint ; his maternal grandmother, Martha W. Poole of Statesboro and many aunts, uncles and cousins. The family will receive visitors on Monday February 22, 2021 from 5:00pm until 8:00pm in the chapel of Joiner-Anderson Funeral Home in Statesboro. Funeral services will be Tuesday February 23, at 11:00am in the chapel of Joiner-Anderson Funeral Home in Statesboro. For those desiring to view the service via livestream may do so by joining the group “Joiner-Anderson Live Stream” at: www.facebook.com/groups/jafhlive/. Interment will be in the Upper Black Creek Primitive Baptist Church Cemetery. Pallbearers will be Lane Smith, Keith Loveday Jr., Levi Snyder, Michael Snyder, Robby Robinson, Christopher McCullough, and Cameron Duke. Friends may sign the online register book at www.joineranderson.com. Joiner-Anderson Funeral Home & Crematory of Statesboro is in charge of arrangements.

The family of Mr. Matthew Douglas Swint created this Life Tributes page to make it easy to share your memories.

Send flowers to the Swint family.