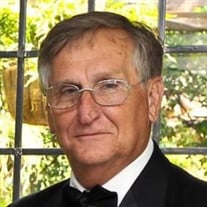 Statesboro, Georgia Michael Albert Beasley, age 75, passed away peacefully at his home on Wednesday, February 3, 2021 after a battle with cancer. Michael was born in Toccoa, GA to the late Albert Lee Beasley and Laverne Sayer Beasley. He was raised in Toccoa and graduated from Stephens County High School in 1964. He went on to study at the Georgia Institute of Technology where he earned a bachelor’s degree in Textile Chemistry in 1969. He remained an impassioned fan of the Ramblin Wreck for the rest of his life. After graduating from Georgia Tech, Michael began a career in textile manufacturing with Chicopee Mills. In 1974, he married Laura Evans, of Thomson, Georgia, and they began a family in Gainesville, GA. Michael advanced his career over the years with West Point Pepperell in Opelika, AL and Dan River Mills in Danville, VA. In 2004, Michael and Laura moved to Statesboro where Michael led King America as President until his retirement in 2014. He enjoyed golf, traveling with Laura, Georgia Tech football, completing crosswords puzzles and being a great grandfather as “Papa Bear.” Michael was a member of Statesboro First United Methodist Church where he served as an usher and a member of Forest Heights Country Club. Michael is predeceased by his parents and sister, Wanda Kesler, and brother-in-law, Donald Kesler. Michael is survived by his wife of 46 years, Laura Evans Beasley; his son and daughter-in-law Bryan and Erin Beasley of Denver, NC, his daughter and son-in-law Katie and George Brooks of Danville, VA, his son and daughter-in-law Bob and Jessica Beasley of Short Hills, NJ, and his younger sister, Cheryl Nolen of Austin, TX. He is also survived by his grandchildren Jack Beasley, Alex Beasley, Evan Brooks, Davis Beasley, Landon Brooks, Warren Beasley and Sadie Badgett. Visitation will be Saturday, February 6, from 1:00pm until 2:00pm in the fellowship hall of Statesboro First United Methodist Church followed by a service at 2:00pm in the sanctuary with Reverend Scott Hagan officiating. The service can be viewed live online at www.statesborofirst.com/stream. A private interment ceremony will be Sunday at West View Cemetery in Thomson, Georgia. The family requests, in lieu of flowers, donations be made to Statesboro First United Methodist Church 101 S. Main Street Statesboro, GA 30458 or to Ogeechee Area Hospice, P.O. Box 531, Statesboro, Georgia 30459. Friends may sign the online register book at www.joineranderson.com Joiner-Anderson Funeral Home & Crematory of Statesboro is in charge of arrangements.

Statesboro, Georgia Michael Albert Beasley, age 75, passed away peacefully at his home on Wednesday, February 3, 2021 after a battle with cancer. Michael was born in Toccoa, GA to the late Albert Lee Beasley and Laverne Sayer Beasley. He was... View Obituary & Service Information

The family of Mr. Michael Albert Beasley created this Life Tributes page to make it easy to share your memories.

Send flowers to the Beasley family.