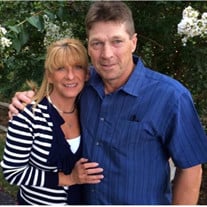 Michael A Joyce, age 60 and Robin (Gracia) Joyce, age 59 passed away peacefully together of Covid-19 in Georgia. Michael died on August 29th just 5 days after Robin who died on August 24th. They were married for 41 years and lived 33 years in Cary, NC before recently transitioning to Georgia. They will be deeply missed by all those that knew them. Michael was born on May 27, 1961 in Northridge, CA and raised in Nashua, NH. He is survived by his mother, Theresa M. Joyce of Concord, NH, and his extensive loving family, Carol and Richard Howe of Concord, NH, Jimmy and Cindy Joyce of Grand Junction, CO, Nancy and Bill Dubois of Nashua, NH, Peggy Joyce and Jack Rosenberg of Ascot, England, Patti and Brian Naro of Concord, NH and Danny Joyce, Stella, NC. He was predeceased by his father, James C. Joyce Sr., his brother, Thomas P. Joyce and his sister, Cynthia M. Joyce. Robin was born December 7, 1961 in New Orleans, LA and raised in Nashua, NH. She is survived by her loving sister Holly Gracia Sison and Brother-in-Law, John Sison of Slidell, LA. She was predeceased by her Father, Joseph A. Gracia Jr and Mother, Jacqueline A. Gracia of New Orleans, LA. Together they held a special place in the hearts of numerous nieces and nephews. They always made each of them feel incredibly special with their unwavering love and support. Michael graduated from Nashua NH Sr. High School in 1979. He was a Master Commercial and Industrial Plumbing Contractor, Consultant and Author of several plumbing books. He taught a variety of plumbing seminars and classes, throughout the country, including classes for the United States Pentagon, New York City hospitals and Plumbing-Heating-Cooling Contractors Association (PHCC) of NC. He was President of Joyce Company in NC and was employed at Campbell Plumbing Mechanical Contractors, Jacksonville, FLA at the time of his death. Mike mentored, coached and gave generously to youths in sports inspiring many children throughout his life. He especially made a major influence and positive impact to the Cary, NC Community. Michael was a skilled fisherman and hunter and leaves behind lifelong memories sharing these hobbies with friends and family. Robin graduated from Nashua NH Sr. High School in 1979. She studied Paralegal and Legal at Boston University. She held an Associates of Science in Business Management at Bryant & Stratton College, Henrietta. She was formerly an Executive Legal Assistant at Dex One Corp, Cary, NC. Robin gave generously of her time and resources to the less fortunate. She mentored High School Students for Communities in School (CIS), Wake County Public Schools, was active in many charitable causes and was a 10-year volunteer at the Jimmy V Golf Classic in NC. Robin was a 4th degree Black Belt in Taekwondo from White Tiger Martial Arts. Of all the lives that Michael and Robin touched, their proudest achievement was marrying and caring for each other and their families. They met at Nashua High School and spent their first few years following the Grateful Dead across the USA before embarking on their professional lives. They celebrated their 40th year wedding anniversary in 2020 by making a lifetime luxurious RV trip touring the USA. They highlighted the unexpected beauty in the sites they saw and the incredibly kind people they met along the way. They were a kind and beautiful couple. While their lives were cut short, they will remain forever in our hearts. The families have chosen to hold a private service at a later date. In lieu of flowers, Memorial Donations to honour Michael and Robin’s passion to inspire youths can be made to the Boys and Girls Club of Greater Nashua: https://www.bgcn.com/how-to-help/donate/ One Positive Place, Nashua, NH 03060 “For those we love, don’t go away. They walk beside us every day. Unseen, unheard, but always near”

Michael A Joyce, age 60 and Robin (Gracia) Joyce, age 59 passed away peacefully together of Covid-19 in Georgia. Michael died on August 29th just 5 days after Robin who died on August 24th. They were married for 41 years and lived 33 years in... View Obituary & Service Information

The family of Mr. & Mrs. Michael & Robin Joyce created this Life Tributes page to make it easy to share your memories.

Send flowers to the Joyce family.