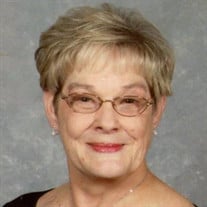 On April 5, 2022, Nannette Harriette Cone Adams slipped away from this earthly life to join loved ones gone before in her eternal home with her Heavenly Father. She was born on Jan. 21, 1938, to Mayor J. Gilbert and Nannette Ruff Cone. They were a source of pride to her for her entire life and she leaves their legacy to be such for her children and grandchildren. Her main goal was to be the best mother to her three children Kimball Hershel Harville Jr., Gilbert Breck Harville, and Keisha Nannette Eisenreich and she was. Harriette is preceded by her parents, her brother Gilbert Cone Jr., her son Gilbert Breck Harville, her daughter-in-law Cynthia Sula Olliff Harville and her husband T. Roberts Adams. Surviving are her son Kimball Hershel Harville Jr., her daughter Keisha Nannette Eisenreich (Dan), her granddaughters Emily Hope Eisenreich and Kimberly Harville, her grandsons Jacob Ryan Harville, Breck Jamison Harville and Justin Kimball Harville, her three step children Gaye Perry Williams (Chris), Suzanne Perry Adams (Ricky) and Thomas Haynes Perry Jr., her nieces Catherine Cone Bazemore (Greg), Cindy Williams Boor, and Margaret Selph (Jimmy) and her great grandchildren who she adored. She is also survived by her dear life sister friend Connie Mathis, two of her high school “Fab Sisters” Sylvia Harville and Bobbie Sikes Brock, her sister-in-law Peggy Harville Brazzell and her brother-in-law Virgil K. Harville Jr. Her precious cat, Sugar Muffin, will miss her. Harriette was a native of Bulloch County and a longtime member of First Baptist Church Statesboro. She was a 1956 graduate of Statesboro High School and attended Georgia Teachers College (now Georgia Southern University). She held several bookkeeping positions and once owned a small trucking company. She was mostly known for her sense of humor and for the love and care she showed to the people around her. In lieu of flowers, memorial donations may be made to the American Heart Association or First Baptist Church Statesboro 108 N. Main Street Statesboro, GA 30458 A private graveside service will be held at a later date.

On April 5, 2022, Nannette Harriette Cone Adams slipped away from this earthly life to join loved ones gone before in her eternal home with her Heavenly Father. She was born on Jan. 21, 1938, to Mayor J. Gilbert and Nannette Ruff Cone. They... View Obituary & Service Information

The family of Mrs. Nannette Harriette Cone Adams created this Life Tributes page to make it easy to share your memories.

Send flowers to the Adams family.