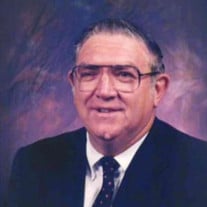 Statesboro, Georgia Mr. Randy Edenfield passed away peacefully, on Sunday, October 10, 2021, at the Ogeechee Area Hospice Inpatient Facility in Statesboro, after a long and courageous battle with cancer. He was surrounded by his loving family. A native of Bulloch County, Randy was born on November 24, 1942, to the late Lorine Conley Edenfield and David E. “Dock” Edenfield. He was also preceded in death by his step mother, Alma Hendrix Edenfield; sister, Mildred Ingram Allen; Maternal grandparents, Lonnie and Eunice Jenkins Conley; Paternal grandparents, David Alton and Mabelle Joyner Edenfield. Randy was a 1961 graduate of Marvin Pittman School. Shortly after graduation he went to work for Brannen’s Tobacco Warehouse No.1 and later worked for several years at Rushing’s Peanut and Drying Station. He worked for 34 years at Brodie Meter Co. ( formerly Rockwell and Brooks Instrument) After the plant closed, Randy worked for a little over 7 years in the Garden Center at Lowe’s, in Statesboro. Randy has always been known for his “green thumb” and his ability to grow, fix, design and build anything. Randy served 4 years in the Georgia National Guard, during which time he was stationed at Fort Ord, California. Randy loved his Lord and Savior, Jesus Christ and was thankful to God for everything! He was an active member of Pittman Park United Methodist Church until his health declined. Surviving is his wife and soulmate of 55 years, Lannette Bird Edenfield; one son, Keith (Angee) Edenfield and a daughter, Dianne (Rusty) Schol; Three grandchildren, Nick Edenfield, Jenna (Maurice) Syphore and Nathaniel Schol. Also surviving are two brothers, Jimmy (Debbie) Edenfield, Doy (Cathy) Edenfield, and one sister, Kay (Gene) Boyd and several nieces and nephews Visitation will be Tuesday evening, 5 – 7 PM, in the chapel of Joiner Anderson Funeral Home in Statesboro. The funeral will be Wednesday morning at 11:00 AM, in the chapel of Joiner Anderson with Rev. David Blalock and Rev. Larry Bird officiating. For those unable to attend, the service will be live streamed at www.facebook.com/groups/jafhlive Burial will be in Bulloch Memorial Gardens with Rev. Bill Bagwell presiding. Pallbearers will be Nick Edenfield, Nathaniel Schol, Rusty Schol, Maurice Syphore, Clay Pierson and Gene Boyd. The family would like to express their gratitude to the nurses and staff of Ogeechee Area Hospice. Contributions may be made to: Ogeechee Area Hospice, P.O. box 531, Statesboro, Georgia 30459 or Pittman Park United Methodist Church’s Memorial Fund, 1102 Fair Road, Statesboro, Georgia 30458. Friends may sign the online register book at www.joineranderson.com. Joiner-Anderson Funeral Home & Crematory of Statesboro is in charge of the arrangements.

Statesboro, Georgia Mr. Randy Edenfield passed away peacefully, on Sunday, October 10, 2021, at the Ogeechee Area Hospice Inpatient Facility in Statesboro, after a long and courageous battle with cancer. He was surrounded by his loving family. A... View Obituary & Service Information

The family of Mr. Randy Edenfield created this Life Tributes page to make it easy to share your memories.

Send flowers to the Edenfield family.