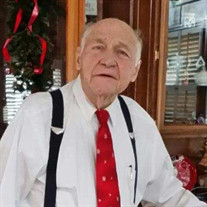 Raymond Orlando Pankratz, 92, recently of Statesboro, Georgia, formerly of Folkston, GA, passed away on Saturday, November 7, 2020, in Statesboro. Ray was born in Goessel, Kansas, to Peter William and Margaret (Buller) Pankratz on November 5, 1928. He grew up in and around Canton, Kansas, where he lived until leaving home in 1947 to join the United States Air Force. It was during his time stationed at F.E. Warren AFB near Cheyenne, WY, that he met the love of his life, Mary Louise Andrea. They were married in the base chapel on October 13, 1951. Furthering his education while serving his country in the military, Ray continued to pursue his degree after leaving the military in 1955. He and Mary eventually moved to Jacksonville, FL, where he received his degree in accounting from Jacksonville University in 1959. The family moved to Folkston, GA, in 1960 where he opened a private practice offering accounting services, with Mary serving as office manager. This is where they raised their three children, until they sold the practice in 1987 and retired to travel the country in their motor home. Ray is preceded in death by his wife, Mary Andrea Pankratz, who passed away in 1993, after more than 41 years together. He was the last surviving member of his immediate family, which included two sisters and two brothers. Surviving are his children, Susan Powell, Statesboro, GA, Richard Pankratz (Marva), Ormond Beach, FL, and Lynn Carper (Bill), Pensacola, FL; five grandchildren, Erik Powell (Charlene), Statesboro, GA, Wyatt Powell, Marietta, GA, Chelsey Pankratz, Jacksonville, FL, Kara Pankratz, St. Augustine, FL, and Christopher Paul Sikes, Pensacola, FL; and several nieces and nephews. A graveside service and inurnment will be held at a later date. Friends may sign the online register book at www.joineranderson.com. Joiner-Anderson Funeral Home & Crematory of Statesboro is in charge of arrangements.

The family of Mr. Raymond Orlando Pankratz created this Life Tributes page to make it easy to share your memories.

Send flowers to the Pankratz family.