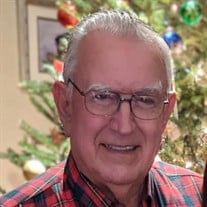 Reuben Bickle Thomas, Sr., 80, of Thomasboro passed Sunday afternoon at University Hospital. He was born to George Norton, Sr. and Lina Zeigler Thomas in the family farmhouse, where he would reside until his passing. He was raised in Little Horse Creek Baptist Church and later would serve as a deacon for nearly 38 years. He was a graduate of Screven County High School and furthered his education by obtaining a Diesel Mechanic Degree from South Georgia Technical School. As a student he excelled, and upon graduation, he was even offered a teaching position with the school. He graciously declined so that he could serve his country in the US Army. While enlisted, he was stationed in Germany and Turkey, where he utilized his skills in maintenance of the military base fleet. In 1964, after four years, he returned home to Screven County and married his college sweetheart, Carol Morris. He began employment with the Sylvania Ford Tractor Dealership and was employed for two years before his brother Robert and he would take control and expand the operation of the family farm. Together, they were very successful and achieved numerous farming awards throughout their careers. Bickle was named Man of the Year in Soil Conservation in 1984. In 2002, Bickle retired due to his health. In retirement, he enjoyed spending time with his family, collecting antique tractors, and frequenting Dr. A.L. Freeland's Briar Creek Boatworks for fellowship on Fridays. He was preceded in death by his parents; a daughter-in-law, Lisa Poythress Thomas; siblings, William Robert Thomas, Sr., George N. Thomas, Jr., Mary Frances Bragg, and Caroline Brinson. Survivors include his wife of 56 years, Carol Morris Thomas; children, Reuben BickleThomas, Jr. (Carol), George Randall Thomas (Gretchen), and Sharon Thomas Milner (Stephen), all of Thomasboro. His grandchildren include: Jonathan Thomas, Nathan Thomas, Kristen Thomas, Lauren Thomas, Lindsey Thomas, Matthew Thomas, Madison Thomas, Taylor Forney, Jarred Zipperer, Alana Milner, and Thomas Milner. He is also survived by two sisters-in-law, Nancy Thomas, of Thomasboro; and Bobbie Morris of Americus; and a host of nieces and nephews. Graveside services will be held Wednesday, January 6, 2020 at 4:00 pm in the Little Horse Creek Baptist Church Cemetery with Rev. Chad Cofield and Rev. Darrell Young officiating. The family will receive friends an hour prior to the service. Interment will follow with military honors. Pallbearers will be Jonathan Thomas, Nathan Thomas, Matthew Thomas, Thomas Milner, Ricky Hollingsworth, Keith Gonya, and William Thomas, Jr. Honorary pallbearers will be A.L. Freeland, John Lacienski, Charles Edwards, Steven Schuyler, Phil Parker, and Larry Crouch. Friends may sign the online register book at www.joineranderson.com Joiner Anderson Funeral Home Screven Chapel is in charge of all arrangements.

Reuben Bickle Thomas, Sr., 80, of Thomasboro passed Sunday afternoon at University Hospital. He was born to George Norton, Sr. and Lina Zeigler Thomas in the family farmhouse, where he would reside until his passing. He was raised in Little... View Obituary & Service Information

The family of Mr. Reuben Bickle Thomas Sr. created this Life Tributes page to make it easy to share your memories.

Send flowers to the Thomas family.