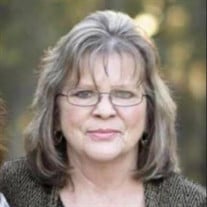 Brooklet, Georgia Rhonda Denise Iler Deloach, age 68, died Monday, September 6, 2021 at Memorial Health Hospital in Savannah, Georgia after a brief illness. She was one of six children born to the late Harper John Iler Jr. and Maggie Jean Davis Iler. Her father was in the military so they lived in many places during her childhood. While the family was stationed in Knob Noster, Missouri, Rhonda became Home Coming Queen and graduated from Knob Noster High School in 1971. She married Terry Hartwick in 1970 and they moved to North Little Rock, Arkansas where they raised their two children. In 1987 Rhonda returned to Bulloch County. She worked at Braswell’s and was the owner and operator of a convenience store for many years. She finished her work career as Clerk of Court for the City of Register in 2019. Rhonda loved spending countless hours in the sun and water; tending to her plants, searching for arrow heads or floating in the Buffalo River. Her greatest joys came from spending time with her family and taking care of her dogs, Henry and Herman. Rhonda was preceded in death by her parents, a brother Harper John Iler III, and sisters Tonya I. Hodges and Jenny I. Pagan. Surviving are her daughter and son-in-law, Tammy and Scott McCormick of Brooklet and a son, Ryan Hartwick of North Little Rock, Arkansas; her grandchildren, Alyssa Hartwick and Kyler and Jacob Martin of Brooklet; one sister, Lisa Cannon of Claxton; one brother, Joey Iler (Karen) of Nevils,; an aunt and uncle, Robbie and Sue Wilson of Kentucky and a host of nieces, nephews and cousins. A memorial service will be held on Thursday, September 9, 2021 at 2:00 pm in the chapel of Joiner-Anderson Funeral Home with Pastor Jody Bryant officiating. Friends may sign the online register book at www.joineranderson.com Joiner-Anderson Funeral Home & Crematory of Statesboro is in charge of arrangements.

The family of Ms. Rhonda Denise Iler Deloach created this Life Tributes page to make it easy to share your memories.

Send flowers to the Deloach family.