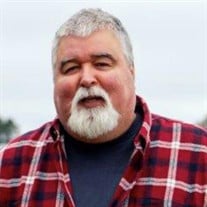 Mr. Ricky Allen McClain Sr., age 62, passed away early Monday morning, June 21st 2021 at East Georgia Regional Medical Center in Statesboro with his family by his side. Ricky was born on June 15th 1959 in Screven County to the late Mr. Clifford McClain and Mrs. Birdie Mae McClain. He was raised by his mother and step-father, Danny Tanner, in Sacramento, CA until he was in high school and they moved back to Georgia. He graduated from Statesboro High School in 1977 and then served his country in the United States Marine Corps. Following his service, he met the love of his life, Karen Miller, and they married in 1980 and began raising a family together. Ricky was a hard worker who retired following many years of service, including over 26 years as a postal contract driver. He enjoyed fishing with his family and friends, vacationing at Clark's Hill with family, and he loved going to the race track with his son and working as “crew chief” and “co-owner” for his son Ricky, #55. Ricky’s passion in life was the time spent with his wife, his children and grandchildren, and his friends. He will be dearly missed by all that knew him. Ricky was preceded in death by his parents and his step-father. He is survived by his loving and devoted wife of over 40 years, Karen Miller McClain, his daughter and son-in-law, Paige and Matt Mann, his son and daughter-in-law, Ricky Jr. and Alyssa McClain, his grandchildren, Carter Mann, Kinsley Mann, Karsyn Mann, Rhett McClain, and Aubree McClain, his brothers, Cliff McClain and Scotty Tanner, and his wife’s sisters, Debi Denny (Bill), Pam Harris (Robert Boyd), and Christina Miller. The family will receive visitors on Tuesday from 5:00pm until 7:00pm at Joiner-Anderson Funeral Home in Statesboro. The funeral will be held on Wednesday at 2:00pm in the funeral home chapel with Rev. Ricky Allen officiating. Interment will be at Macedonia Baptist Church Cemetery. Pallbearers will be Ricky McClain Jr., Matt Mann, Eric Prosser, Brian Daniels, Tyran Garbett, Daniel Brown, Daniel Newsome, Cliff McClain, Charles Walker, Ricky Miller, Bobby Layne, Robert Boyd, Wight Hodges, Joseph Blanchette, and Scotty Tanner. Roses and Red, Violets are Blue, It is sure going to be hard, Here without you. - We love you Ricky. - Friends may sign the online register book at www.joineranderson.com Joiner-Anderson Funeral Home & Crematory of Statesboro is in charge of arrangements.

The family of Mr. Ricky Allen McClain Sr. created this Life Tributes page to make it easy to share your memories.

Send flowers to the McClain family.