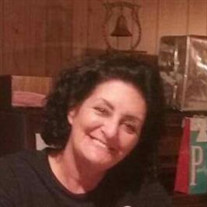 Mrs. Robbin Roberta Fegan Deloach, age 59, died on Monday November 22nd 2021 at her home in Statesboro, GA. Robbin was born in Lansing, MI on August 31st 1962 to Mr. Charles Griffith and Mrs. Bonnie Fegan Griffith. She moved to Swainsboro, Georgia at a young age and worked for many years as a cosmetologist. She later worked at the Boys and Girls Club and most recently with Action Pact in Statesboro where she had a passion for caring for and interacting with seniors. She was known for always putting others before herself, and being a devoted, “one of a kind,” friend, mother, and grandmother. She was preceded in death by her father, her sister, Winona Griffith, and a grandchild, August Dickerson. She is survived by her two daughters and sons-in-law, Stephanie and Gene Crews of Alvin, TX, and Alicia and Alston Dickerson of Statesboro, her son, Cam Deloach and his significant other Katelynn Altman of Statesboro, her grandchildren, Ryan Crews, Dalton Crews, Kyler Dickerson, and Lincoln Dickerson, her mother, Bonnie Griffith of Swainsboro, GA, her two sisters, Nancy Griffith and April Barwick, as well as several nieces and nephews. The family will receive visitors on Sunday from 4:00pm until 6:00pm at Joiner-Anderson Funeral Home in Statesboro. Graveside services and burial will be held on Monday at 4:00pm at Lake Cemetery in Metter, GA. Pallbearers will be Alston Dickerson, Gene Crews, Alex Smith, JD Kirby, Dennis Joyner, and Jimmy Barwick, Jr. In lieu of flowers, the family requests that memorial contributions be made to Action Pact, 235 Granade Street, Statesboro, GA 30458. Friends may sign the online register book at www.joineranderson.com Joiner-Anderson Funeral Home & Crematory of Statesboro is in charge of arrangements.

The family of Mrs. Robbin Roberta Fegan Deloach created this Life Tributes page to make it easy to share your memories.

Send flowers to the Deloach family.