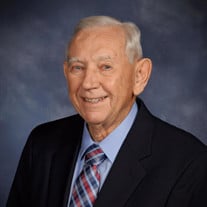 Loganville, Georgia Robert Creasy was born on October 28, 1937, in Liberty County, Ga., in the former town of Willie. He was the son of James Thomas Creasy Sr. and Safronia Warhurst Creasy. The youngest of 12 children, he grew up in Nevils. Robert graduated from Georgia Teachers College, now Georgia Southern University, in 1963, after attending the Georgia Institute of Technology and serving two years in the U.S. Army. He worked for the U.S. Food and Drug Administration for 35 years of service, retiring as the Director of the State Co-Operative Programs. Robert met his late wife, Carol Louise Miller, in Alexandria, Va., and they were married on March 17, 1963 in Martinsburg, W. Va. After living in Savannah, GA., they moved to Atlanta, where their first child, Barbara Carol, was born. Later relocating to Jacksonville, Fla, they welcomed their second child, Ginger Lanette and their third child, Paul Robert. The family moved to Stone Mountain in December 1973 and soon welcomed their fourth child, Adam Wayne. Robert was blessed with nine grandchildren: Peyton Carol, daughter of Barbara and Dan Holzworth; Savannah Chase, daughter of Ginger Strejcek and Martin Strejcek; Joshua Paul, Ava Jean, and triplets Ella Louise, Gavin Robert and Kaden William, children of Paul and Dawn Creasy; and twins Jordan Adam and Noah Robert, sons of Adam and Rachael Creasy. All reside in Gwinnett County. The Lord brought Glenda Harris Casey into Robert’s life and they were married on December 30, 2006, at Loganville First United Methodist Church. Robert embraced his expanded family, including stepdaughter Elisa McCarty Guzik and granddaughters Ashley Elizabeth and Alexandra Noel of San Clemente, Ca., and stepson David McCarty, his wife Kim and grandsons Benjamin Harris and Nickolas Cade of Bowling Green, Ky. Robert loved the Lord and was a faithful steward in the church. He was an active member of Arlington First United Methodist in Jacksonville, Stone Mountain First United Methodist and Loganville First United Methodist Church. He held many leadership positions at the Conference, District and local levels including chairing the Wesley Community Center Board, organizing the annual Wesley Walk in Stone Mountain, serving as a Sunday school teacher and a youth counselor. He was the coordinator and builder of much of the outdoor chapel at the former Camp Wesley in Fairburn, a youth camp that brightened the lives of many Atlanta inner-city children. Some of his fondest shared memories were Church mission trips, including traveling to Mexico and the Appalachia Service Project. One of the highlights of his life was visiting the Holy Land, where he also swam in the Dead Sea. Robert was a wonderful, loving husband, father, grandfather, brother, uncle and mentor to all! His many hobbies included gardening, landscaping and “rock hounding” but none compared to his love of flying. He taught flight and ground school at the former Stone Mountain Airport and was the proud owner of a Cessna 172 Skyhawk, a treasured means of travel for countless family adventures. He enjoyed waterskiing, fishing trips with his brothers, beach vacations with his family and playing the harmonica. In addition to his wife, children and grandchildren, he is survived by his sisters-in-law Meredith Creasy of Augusta, Ga., and Gennie Creasy of Valdosta, Ga.; his brother-in-law Donald Miller (and Sherry) of Martinsburg, W. Va.; and many nieces and nephews. Visitation will be Sunday, April 11, 2021 at 2 p.m. in the Loganville First United Methodist Church Family Life Center, followed by the Celebration of His Life in the church sanctuary at 3 p.m. The ceremony will be live streamed.. Please visit the LFUMC website for the streaming link: http://loganvillefumc.org. A graveside service and burial will be held at Nevils United Methodist Church Cemetery on Saturday, April 17, 2021 beginning at 1:00 p.m. with Reverend Rus Black officiating. In lieu of flowers, please consider a donation to the Loganville FUMC Pre School Scholarship Fund, 221 Main Street, Loganville, GA 30052 or to the Nevils United Methodist Cemetery Fund, c/o Tessa Martin, 2000 Fronies Circle, Brooklet, GA 30415. Friends may sign the online register book at www.joineranderson.com. Joiner-Anderson Funeral Home & Crematory in Statesboro is in charge of arrangements.

Loganville, Georgia Robert Creasy was born on October 28, 1937, in Liberty County, Ga., in the former town of Willie. He was the son of James Thomas Creasy Sr. and Safronia Warhurst Creasy. The youngest of 12 children, he grew up in Nevils.... View Obituary & Service Information

The family of Mr. Robert Creasy created this Life Tributes page to make it easy to share your memories.

Send flowers to the Creasy family.