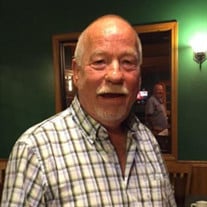 Middleground Community Mr. Ronnie Ray Gay, age 68, entered the Lord’s house, Tuesday March 15, 2022, at his residence under the care of Ogeechee Area Hospice. He joined his daughter, Nikki Gay, in paradise. Ronnie attended school in Twin City, Ga and had worked his whole life in the Statesboro area. Many knew him as “The Radiator Man”. His life was touched by many people as he saw everyone as equal. He was last employed with Sheppard Lumber Company. Ronnie was preceded in death by his parents, Bill and Lola Gay; his siblings, Cecil, James L., B.L., Larry, Mildred and Arlene Grimes; his daughter, Nikki Gay was at Heaven’s gate to welcome him home. He leaves his wife of 41 years, Tammy McBride Gay; a son and daughter-in-law, William and Kristy Gay; a grandson, Austin Gay all of Statesboro and a sister, Juanita Ivey and her husband Thomas of Brooklet. Several nieces and nephews also survive. Additional survivors are his special friends, Shelia Cox and Mom Cox both of Statesboro and his four legged companions, Johnny Jones “J.J.” and Sugar “Sissy”. The family will receive visitors on Thursday from 5:00pm until 8:00pm at Joiner-Anderson Funeral Home in Statesboro Funeral services will be Friday at 11:00am in the chapel of Joiner-Anderson Funeral Home with Rev. Roy Jarriel officiating. Interment will be in Bulloch Memorial Gardens. Pallbearers will be Gary Smith, Andrew Farley, Larry Hodges, Tony Gay, Bubba David Williams and Kevin Fadden. Honorary Pallbearers will be Randall and Angie Moon and Thomas and Juanita Ivey. Ronnie loved flowers and they will gladly be accepted, for those desiring to make a memorial contribution, the family requests they be directed to St. Judes Children’s Research Hospital at www.stjude.org or 1-800-478-5833 or the Shriner’s Hospitals for children, at www.donate.lovetotherescue.org or 2900 Rocky Point Drive, Tampa, Florida 33607. Friends may sign the online register book at www.joineranderson.com. Joiner-Anderson Funeral Home & Crematory of Statesboro is in charge of the arrangements.

The family of Mr. Ronnie Ray Gay created this Life Tributes page to make it easy to share your memories.

Send flowers to the Gay family.