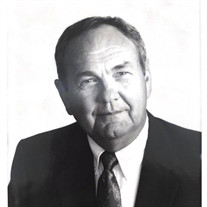 Roy C. Kilpatrick September 27, 1936 – September 13, 2020 Roy Clyde Kilpatrick, 83, died at his home in Statesboro, Georgia, on September 13, 2020, from a sudden illness. He was a native of Oconee County, Georgia, having been born in Salem, and reared in Farmington. Roy was the youngest child of Glen and Eula Vickery Kilpatrick. A 1954 graduate of Watkinsville High School, he attended Georgia Southern College and Georgia State University. He was a graduate of Northwestern University School of Mortgage Banking, Chicago, Illinois. Roy was a licensed real estate broker, real estate appraiser, and insurance agent. Roy began his career in Atlanta where he was employed with D.L. Stokes and Company, and Mortgage Company of Georgia which later became The Georgia Loan and Trust Company. In 1970, he and his wife, Thelma, moved to Swainsboro where he was employed with R.J. Waller Real Estate & Insurance until they opened their own business, Kilpatrick Realty & Insurance. Roy and Thelma operated their business in Swainsboro for more than 25 years until their retirement. Following retirement, Roy continued to work part-time in insurance for many years. Roy’s life was one of service to his community. While residing in Swainsboro, he was a member of Swainsboro First Baptist Church, Steadfast Sunday School class, and he served on the church Board of Trustees. He served in many offices of the Swainsboro Rotary Club, including president. As a Rotarian, he was a Will Watt Fellow as well as a Paul Harris Fellow. Roy served as president of the Swainsboro Golf & Country Club, as chairman of the Industrial Development Committee, as chairman of the Economic Development Committee, and as president of the Swainsboro-Emanuel County Chamber of Commerce for two terms. Roy served on the Board of Trustees of Swainsboro Technical College, on the Board of Directors and President of the Altamaha Basin Board of Realtors, on the Board of the Georgia Association of Realtors, as president of the Independent Insurance Agents of Georgia (IIAG), and on the National Board of IIAG as State National Director. In 1999, the Kilpatricks moved to Statesboro and made their home on Thelma’s family farm. A lifelong Rotarian, Roy was a member of the Downtown Statesboro Rotary Club, Forest Heights Country Club, Statesboro First Baptist Church, Open Door Sunday School Class, 10:30 Coffee Club, and Country Store Coffee Club. In 2011, Governor Nathan Deal appointed Roy to serve on the Georgia Student Finance Commission representing the 12th Congressional District of Georgia. Roy will be remembered as a true Southern gentleman, a giant of a man with a personality and joyful spirit to match. He seldom met a stranger and, if so, they were sure to quickly become friends and golfing buddies. His wit, stories, and bear hugs are legendary and will be sorely missed by his friends and family. Roy was preceded in death by his parents, his brother and sister-in-law, Robert Harvey Kilpatrick and Frances, sister-in-law, Jennie Kilpatrick, and nieces Lisa Kilpatrick and Mary Alice Kilpatrick. Survivors include his wife of 52 years, Thelma Mallard Kilpatrick, of Statesboro, brother and sister-in-law, Thomas and Barbara Kilpatrick of Conyers, and brother-in-law and sister-in-law, Bobby Hall Mallard and Josephine, of Norfolk, Virginia. Many nieces and nephews, great and great-great nieces and nephews, as well as many cousins also mourn his death. A service to celebrate the life of Roy C. Kilpatrick will be held on Thursday, September 17, 2020, at Joiner-Anderson Funeral Home, 502 Miller Street Extension, Statesboro, Georgia 30458. Visitation with family will be held at 10:00 a.m., followed by the funeral at 11:00 a.m. in the chapel with Dr. Bill Perry officiating. Burial will follow at East Side Cemetery. Pallbearers will be nephews: Jason McGee, Justin Brunet, Jorge Brunet, Joash Brunet, Keith White, Brian White, Michael Mallard, Keith Mallard, Pete McCoy, Ryan McCoy, and Guy Kinney. Honorary pallbearers will be: Downtown Statesboro Rotary Club, 10:30 Coffee Club, Country Store Coffee Club, and Roy’s golfing buddies. All CDC social distancing guidelines will be observed. Services are streamed using Facebook Live through a private group. Only members of the group will be able to view the service. In order to view the service, log into Facebook on your phone or computer and join the group “Joiner-Anderson Live Stream” at: https://www.facebook.com/groups/jafhlive/. If so desired, memorial contributions may be made to First Baptist Church, 108 North Main Street, Statesboro, Georgia 30458 or Georgia Southern University Athletic Foundation, P.O. Box 8115, Statesboro, Georgia 30460. Friends may sign the online register book at www.joineranderson.com. Joiner-Anderson Funeral Home & Crematory of Statesboro is in charge of the arrangements.

The family of Mr. Roy Clyde Kilpatrick created this Life Tributes page to make it easy to share your memories.

Send flowers to the Kilpatrick family.