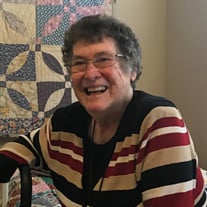 Statesboro, Georgia Mrs. Ruth Brown Carswell, age 90, died Tuesday January 26, 2021, at Jenkins County Medical Center. Ruth was born in Holmes County Florida to the late Tillman and Foye Hall Brown. She married Lex Carswell in April of 1950 and they made their home in Florida. In 1964 Lex accepted a position with Gold Kist Peanut Company and they moved to Statesboro. She worked for several years with Roses Department store, but most of her life was that of a homemaker, mother and grandmother. Ruth was a member of Statesboro Bible Baptist Church where she was a member of the Rock of Ages Sunday School Class and Prime Timers. She had resided for several years at the Gardens at Southern Manor and in September of 2020 became a resident of Browns Health & rehab. She was preceded in death by her husband of 64 years, Lex Carswell and her parents. Surviving are a daughter, Judy C. Finch of Statesboro; a granddaughter and her husband, Kelly and Travis Lane of Statesboro; a grandson and his wife, Travis and Jenny Ivey of Brooklet; her great grandchildren, Brandon, Adrienne, Gabe, Cole, Courtney, A.J. and Colton; her great grandchild, Weslyn James; a brother, Ray Brown of Brandon, FL and a sister and brother-in-law, Faye and Norman Register of Graceville, FL. Several nieces and nephews also survive. The graveside service and burial will be Thursday at 2:00pm at Bulloch Memorial Gardens with Pastor Chris Holden and Brother Ronnie Alderman officiating. Pallbearers will be Jim Tyler, Cody Tyler, Dewayne Conner, Randy Colson, Dustin Cross and Timmy Ivey. The family requests that memorial contributions be made to the Alzheimer’s Association, 4849 Paulsen Street, Suite 103, Savannah, Georgia 31406. Friends may sign the online register book at www.joineranderson.com. Joiner-Anderson Funeral Home & Crematory of Statesboro is in charge of the arrangements.

The family of Mrs. Ruth Brown Carswell created this Life Tributes page to make it easy to share your memories.

Send flowers to the Carswell family.