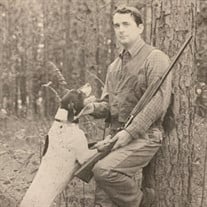 Samuel P Tillman, age 91, born on May 19, 1930 entered into glory on June 3, 2021 at his home outside of Millen Ga. He was cherished as a husband, father, and grandfather. He was a retired physician who practiced in Statesboro for 40 years in Internal Medicine and Cardiology. He was a graduate of John Hopkins School of Medicine in 1955 and did residencies at Duke and at Emory. He returned to his hometown as the first Board Certified physician. He was instrumental in starting the first Coronary Care Unit at Bulloch Memorial Hospital in 1976. He was instrumental in bringing “TPA, the clot buster “to treat heart attacks and save lives to the hospital. He was a Captain in the USAF for 2 years. He was a proud member of the N.C. Society of the Cincinnati, the nation’s oldest hereditary and patriotic organization. He is the 4th grandson of Captain John Tillman, who served in the Revolutionary War in General George Washington’s camp. He was the son of Joseph Tillman who was sheriff of Bulloch County. He had strong ties to the land and agriculture. The family crest “Hope flies with the Farmer”. He was a member of Sigma Chi and proudly represented the Emory Chapter as President in college and assisted in the formation of the chapter in Statesboro. He retired to his beloved Tilmanstone Farms in 2001 outside of Millen. Many of the most enjoyable hours of his life were spent while hunting and fishing on his farm. He especially loved quail hunting and bass fishing. Also he spent the next 20 years planting tree of all types making a forest. He loved the bald cypress the best. He spent a lot of time fishing and have morning fish fries with his best friends Lonnie and Judy Persinger. He also loved quail hunting with Comer Duggan and Leo Parrish. He spent a lifetime trying to get quail to flourish. He was keen on farming techniques such as Conservation Tillage which his beloved farm manager Lamar Black initiated. He loved sharing the farm and entertaining all who came by to visit. Sam and Sharon enjoyed having their grandchildren come spend time on the farm to go fishing, camping, and exploring. Sam was preceded in death by his parents, Joseph and Edna Dekle Tillman, and the mother of his children, Virginia Lee Floyd Tillman, son Samuel P Tillman Jr., granddaughter Rachael Tillman, step-son Christopher Epps, Billy Tillman, brother, Joe Robert Tillman, brother, and step-granddaughter Ava Epps. “Doc” is survived by his wife Sharon Tillman, his daughter, Laura Hendley (Ray), sons, Joseph Tillman and Lee Tillman, step son Kevin Epps(Dana), grandson Samuel Tillman, granddaughters, Ginny Lee (Dalton) Rushing, Carleigh Tillman, Emma Farr(Zack), Katherine Tillman, (Hovav), step granddaughter, Arizona Epps, step grandsons, Tyler Epps, and Devin Epps, great granddaughters Georgia Grace Rushing, Kinsley Rae Tillman and Franny Shacham and great grandson J. R. Rushing. The family will receive visitors on Saturday, June 5th from 10:00am until 11:00am at Joiner-Anderson Funeral Home in Statesboro. The funeral will follow visitation at 11:00am with Pastor Jay Reppert officiating. A private interment will be at Fair Haven U.M.C. Cemetery in Millen, Ga. The family requests that any memorial contributions be made to the Special Olympics at https://www.specialolympics.org/get-involved/donate Friends may sign the online register book at www.joineranderson.com Joiner-Anderson Funeral Home & Crematory of Statesboro is in charge of arrangements.

Samuel P Tillman, age 91, born on May 19, 1930 entered into glory on June 3, 2021 at his home outside of Millen Ga. He was cherished as a husband, father, and grandfather. He was a retired physician who practiced in Statesboro for 40 years... View Obituary & Service Information

The family of Dr. Samuel P. Tillman created this Life Tributes page to make it easy to share your memories.

Send flowers to the Tillman family.