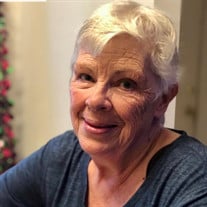 Sandra Louise Pisaretz Murphy passed away at her home the morning of Wednesday, September 9, 2020. Born in Bridgeport, Connecticut, on September 25, 1945, Sandy graduated Masuk High School in Monroe, CT. She was an exceptionally bright student and excelled in her studies and extracurricular activities as the founder of the teen canteen and a popular cheerleader for the basketball team. She met the love of her life, Ronald J. Murphy, at Masuk and insisted he finish college before she would marry him. Sandy then majored in English at Albertus Magnus College for three years. ’Ron’ graduated from Fairfield University in the spring of 1965. He then reunited with Sandy and refused to take no for an answer to his marriage proposal. They were wed January 13, 1966. In August of 1966 their son Ron Jr. was born. Two years later Ron received a job promotion from General Electric that took the family to Northern California, where their daughter Erin was born in November of 1970. Ron founded Aqua Plex products in 1972 with his Jaycee’s club friend Bill Montgomery along with two of Bill’s work mates from Neptune Aquarium. For thirty-three years, Sandy was behind the scenes supporting Ron until his retirement in 2005. Every home they owned was gorgeously landscaped by Sandy. It was her passion to beautify all that she touched. In 2005, the family moved to Statesboro, Georgia, to be near Sandy’s older brother William Pisaretz. Her Georgia home was lovingly and beautifully decorated in Sandy’s signature artistic style leading to her receiving Yard of the Month several times from the homeowners' association. Sandy lost her brother October 31, 2013 then sadly lost the love of her life Ronald October 30, 2019. She is survived by her son Ronald Murphy Jr.and daughter Erin Murphy, son in law Christopher Ely , sister Lynn Zakowski brother-in-law Hank Zakowski, nephew Henry, brother-in-law Bernard Murphy, sister-in-law Mary Hughes, niece Meghan, cousins Alex Pisaretz and Kathy Pisaretz Taylor, nephew Michael Deegan, niece Kelly Deegan and nephew Brian Deegan. Her kind and compassionate spirit was a force of nature. Sandy was incredibly devoted to her family and will be missed by all that knew her. A private memorial service will be held at a later date. Friends may sign the online register book at www.joineranderson.com. Joiner-Anderson Funeral Home & Crematory of Statesboro is in charge of arrangements.

The family of Mrs. Sandra Louis Pisaretz Murphy created this Life Tributes page to make it easy to share your memories.

Sandra Louise Pisaretz Murphy passed away at her home the morning...

Send flowers to the Murphy family.