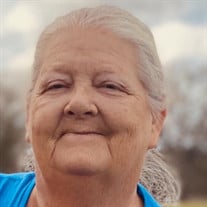 Nevils, Georgia Sandra “Sandy” Kay Futch Blake, age 63, died Wednesday, March 10, 2021 at East Georgia Regional Medical Center in Statesboro. Sandy was the daughter of the late C. L. Futch and Carrie Todd Woods. She lived in the Nevils community most of her life where she enjoyed working for John B. Anderson Peanut Company every peanut season. Always greeting you with a smile, Sandy would do anything for anybody. She was one of a kind and if you ever met her, she considered you a friend. Nothing made her happier than being able to spend time with her family and grandbabies, whom she adored. When she wasn’t at home enjoying the farm life, you could find her at the beach. She was preceded in death by her parents, step-father, Kenneth Woods, a son, Josh Lee, and a sister, Harriett Tapley. Surviving are her husband of 33 years, Steve Blake; two sons and daughters-in-law, John and Shawn Lee, and Jarrod and Paige Lee of Nevils; four grandchildren, Brooke Lee, C.J. Lee, Jobe Lee, and Raegan Lee; two sisters and a brother-in-law, Sue and Derell Anderson of Nevils and Elizabeth Brinson of Savannah; one brother, Lee Futch of Savannah; her step-mother, Peggy Futch of Nevils; a step-sister, Cheryll Pritcher of Florida; and several nieces and nephews. Visitation will be held on Saturday from 10:00 am until 11:00 am at Joiner Anderson Funeral Home in Statesboro followed by a graveside service and burial at Antioch Baptist Church Cemetery with Pastor Mike Newman officiating and Reverend Mitch Lynn assisting. Pallbearers will be Ricky Canady, Hunter Canady, Austin Canady, Randy Morris, Derrick Futch, and Shane Howard. Honorary pallbearers will be her grandchildren, Darlene Wilkes Barnard, Sheri Haire, Kayla Canady, and Casey Durden. Memorial contributions may be made to The Humane Society of Statesboro and Bulloch County, P.O. Box 581, Statesboro, GA 30459, www.statesborohumane.org or The National Kidney Foundation at www.kidneyfund.org/pledge. Friends may sign the online register book at www.joineranderson.com. Joiner-Anderson Funeral Home & Crematory in Statesboro is in charge of arrangements.

The family of Mrs. Sandra "Sandy" Kay Futch Blake created this Life Tributes page to make it easy to share your memories.

Send flowers to the Blake family.