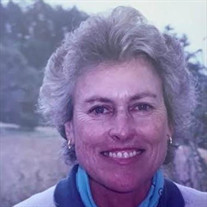 Services are pending for Sarah Blair McAndrew, of Statesboro, Georgia, who died on May 3, 2021 at the age of 90. The cause of death was complications from non-Hodgkin’s lymphoma. Known to her numerous friends as Sally, Mrs. McAndrew is survived by two daughters, Lucia Blair Webster (David M. Webster) of Lake Forest, Illinois, and Sarah Blair Hancock (Kyle Hancock) of Statesboro. Other survivors include her grandchildren Jessie M. Webster of Chicago, Illinois, Charles B. Hancock of Atlanta, Georgia, and Owen H. Hancock of Jacksonville, Florida. She is also survived by her sisters Ruth Robinson Warner of Nashville, Tennessee, and Lucia Robinson Dugliss of San Francisco, California. Other survivors are her two stepsons, Peter P. McAndrew of Pleasantville, New York, and Alexander McAndrew of Sonoma, California, and their families. Sally grew up in Pittsburgh, Pennsylvania, and attended Ellis School there before attending Miss Porter’s School in Farmington, Connecticut. After two years at Sarah Lawrence College in Bronxville, New York, she transferred to and graduated from Vassar College in Poughkeepsie, New York, majoring in art history. Shortly after college, Sally married Lawrence Dilworth Blair, also of Pittsburgh, to whom she was married for 46 years, until his death in 1999. She was subsequently married to W. Peter McAndrew of Marin County, California, who died in 2010. Her accomplishments were numerous and varied. In 1970 she obtained teaching credentials that enabled her to serve for many years as a substitute high school teacher in the San Francisco Public School system. After receiving a master’s degree in museum studies from John F. Kennedy University, she moved from teaching to philanthropy and development work, at the Edgewood Children’s Center in San Francisco, the San Francisco office of the Trust for Public Land, and the San Francisco Foundation. Sally also served as a docent at the DeYoung Museum in San Francisco and on the board of directors of the Associates of the University of California Press. The friendships she made shortly after she and her husband moved from Pittsburgh to northern California in 1953 endured well into the 21st century. They were a defining feature of her life. At the time of her death, Sally was among the last survivors of a group of well-educated, congenial, and talented women, many of whom had arrived in San Francisco, newly married, at about the same time Sally did. Members of this thoughtful and far-seeing cadre became dedicated to community service, to strengthening San Francisco’s unique and cherished civic culture, and—perhaps most of all—to the happiness and well-being of each other. By way of illustration, Sally and many of those women started an investment club, named for “Queen Midas,” which compiled an enviable record of success over a long period of time. Sally’s women’s writing group produced more than one published book, including “Proust, Pickles, and Paychecks,” published in 2003 by Fithian Press, McKinleyville, California, for which she was a co-editor and contributor. There were many other occasions when her life was enriched by the extreme decency and kindness that marked her friendships with these women. She was also particularly delighted by the friendships she later developed with many of the friends of her daughters. She remained keenly interested in pursuits of the mind throughout her life. A versatile correspondent, she avidly pursued news of current events. She also enjoyed hiking, tennis, music, travel, the San Francisco Symphony, the San Francisco Opera, and skiing. She was particularly gratified by her magazine article on museum donor development, which was the cover story in the Sunday magazine section of the San Francisco Chronicle on December 23, 1979. Contributions in her memory may be made to the Trinity Episcopal Church Music Fund, PO Box 2005, Statesboro, Georgia 30459, and the Trust for Public Land, 120 S. LaSalle Street, Unit 2000, Chicago, IL 60603. Friends may sign the online register book at www.joineranderson.com. Joiner-Anderson Funeral Home & Crematory in Statesboro is in charge of arrangements.

Services are pending for Sarah Blair McAndrew, of Statesboro, Georgia, who died on May 3, 2021 at the age of 90. The cause of death was complications from non-Hodgkin&#8217;s lymphoma. Known to her numerous friends as Sally, Mrs. McAndrew... View Obituary & Service Information

The family of Mrs Sarah "Sally" Blair McAndrew created this Life Tributes page to make it easy to share your memories.

Services are pending for Sarah Blair McAndrew, of Statesboro,...

Send flowers to the McAndrew family.