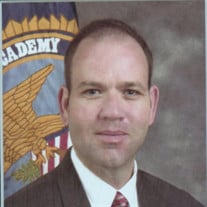 Statesboro, Georgia Mr. Scott Preston Brunson, age 53, died Wednesday December 30, 2020, at East Georgia Regional Medical Center in Statesboro following a series of long illnesses. The native and lifelong resident of Bulloch county was a 1985 graduate of Statesboro High School. Scott began his career in law enforcement with the Statesboro Police Department in 1989 as a patrolman in 1994 advanced to Detective, to Sgt. in 1997, Lieutenant in 1999; Captain in 2008, and Major in 2011. Scott left the Statesboro Police Department in July 2016 and began working with the City of Statesboro Code Enforcement for several years. Scott was a graduate of the 206th Session of the FBI National Academy. He was past president of the Georgia Chapter FBI National Academy Association in 2008 and 2009. He was a member of the Peace Officers Association of Georgia, FBI National Academy Association, and Portal Hunting Club. He was a former member of the Island Hunting Club. Scott was a member of First Baptist Church of Statesboro where he was a member of the Searchers Sunday School Class. He was also a member of the Wednesday Morning Prayer Group. He was preceded in death by his parents, Carlos Edgar Brunson and Dianne Belflower Brunson. Surviving are a daughter and son-in-law, Morgan and Hunter Aldrich of Statesboro; a son Preston Brunson of Statesboro; a sister, Kathryn Coleman of Statesboro; his grandson, Asher Aldrich and a niece, Jordyn Coleman. The family will receive visitors on Monday January 4, 2020, from 10:00am until 11:00am in the chapel of Joiner-Anderson Funeral Home. Funeral services will follow the visitation at 11:00am in the funeral home chapel with Jody Stubbs and Rev. Ricky Allen officiating. Interment will be in Bulloch Memorial Gardens. Pallbearers will be Eric Simms, Mike Chapel, Todd Mashburn, Ray Malone, Jeff Vickery and Tom Woodrum. Honorary Pallbearers will be members of the Searchers Sunday School Class and all FBI National Academy graduates. The family requests that memorial contributions be made to FBINAA Charitable Foundation, Inc. 320 S. Lecanto Hwy #165 Lecanto, FL 34460 or at www.fbinaafoundation.org. Friends may sign the online register book at www.joinernaderson.com. Joiner-Anderson Funeral Home & Crematory of Statesboro is in charge of the arrangements.

The family of Mr. Scott Preston Brunson created this Life Tributes page to make it easy to share your memories.

Send flowers to the Brunson family.