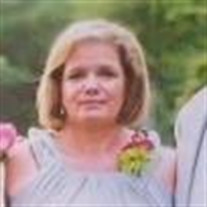 Statesboro, Georgia Ms. Shawn Michelle Rickert Newton, age 64, died Monday February 7, 2022, at her residence. Shawn was born in Frankfurt, Germany during her father’s military career. She moved to Statesboro in 1971, where she remained until her death. Shawn was a 1976 graduate of Statesboro High School. She worked with her parents in their family business, Craig’s Deli in downtown Statesboro for many years, later working for Lewis Printing and Willow Pond. Shawn had been employed with Color Tech in Brooklet for the past four and a half years. She had attended Brooklet Primitive Baptist Church. Shawn was an avid sewer, bowler, (being a member of two leagues, the women’s and mixed leagues), a baker and crafter. She enjoyed putting together puzzles. Her greatest joy was her family; in her children’s younger years she was an active room mother for both. She was preceded in death by her parents, David Rickert and Josephine Rickert and her former husband, Michael Edwin Newton. Surviving are her daughter, Chelsea Newton Williams (Cyril Allen) of Statesboro; a son Christopher Michael Newton (Brianna Sowell) of Statesboro; two grandchildren, Connor Nathaniel Williams and Blakely Keilani Allen; a brother and sister-in-law, Stephen and Joyce Rickert of Statesboro; a sister and brother-in-law, Shirl and Kimball Ellis of Statesboro; her former son-in-law, Daniel Williams; a nephew, Stephen Rickert II; two nieces, Megan Ellis and Amanda Ellis Johnson (Chris); two former sisters-in-law, Karen Tilton of Brooklet and Lynn Hall of Rincon; nephews, Larry Hall, Jr. and Cory Tilton and niece Kacie Tilton; a great niece, Brianna Hall; three special friends, April Fields, Pam Warner and Kathy Baker and her dog Snickers. The family will receive visitors on Thursday from 5:00pm until 8:00pm at Joiner-Anderson Funeral Home in Statesboro. Funeral services will be Friday at 2:00pm in the chapel of the funeral home. The family requests that memorial contributions be made to Ogeechee Area Hospice, P.O. Box 531, Statesboro, Georgia 30459 or the March of Dimes at marchofdimes.org. Friends may sign the online register book at www.joineranderson.com. Joiner-Anderson Funeral Home & Crematory of Statesboro is in charge of the arrangements.

The family of Ms. Shawn Michelle Newton created this Life Tributes page to make it easy to share your memories.