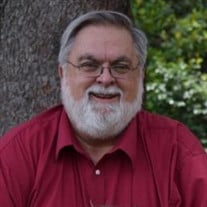 Brooklet, Georgia Thomas Edward “Ed” McMains, 69, of Brooklet, Georgia, died Tuesday evening, September 15, 2020, surrounded by family at East Georgia Regional Hospital, Statesboro, Georgia. Born in Champaign, Illinois, he was a son of the late John Thomas McMains and the late Evelyn Jean Wilson McMains. Growing up, Ed was a member of the Boy Scouts of America and the Order of the Arrow. He had numerous hobbies that included collecting stamps, various currency, and space/NASA memorabilia. He liked to work with his hands in carpentry and string art. He also enjoyed spending time with his family watching movies pointing out all the goofs and continuity errors. He also had a sweet tooth, with a great love of M&Ms. He graduated from Cocoa High School in Cocoa, Florida. He earned his Doctor of Optometry (OD) degree from the Southern College of Optometry in Memphis, Tennessee. He then moved to Okeechobee, Florida where he met his eventual wife, Leslie. After getting married, they moved to Atlanta where he started his first optometry practice. The family then moved to Statesboro, Georgia, and eventually settled with an optometry practice in Rincon, Georgia. Ed was a member of the Episcopal Church for 43 years. In addition to his parents, he was preceded in death by two brothers, John Charles McMains and James Michael McMains. Survivors include his wife of 43 years, Leslie Dee McMullen McMains of Brooklet; his daughter and son-in-law, Thressa and Scott Elam; his grandsons, Eli and Seth Elam; his daughter and son-in-law, Laurie and Danny Harper; grandsons, Kyle and Dustin Harper; his son and daughter-in-law Sean McMains and Caroline Pasinetti McMains; his granddaughter, Olivia Pasinetti McMains; his son Benjamin McMains; his daughter Cassie McMains; his son and daughter-in-law Josh and Rebecca McMains; and a number of nieces and nephews. The memorial service will be held at 10 o’clock Saturday morning, September 19, 2020, at Trinity Episcopal Church, Statesboro, Georgia. Services are streamed using Facebook Live through a private group. Only members of the group will be able to view the service. In order to view the service, log into Facebook on your phone or computer and join the group “Joiner-Anderson Live Stream” at: https://www.facebook.com/groups/jafhlive/. Friends may sign the online register book at www.joineranders.com Joiner-Anderson Funeral Home & Crematory of Statesboro is in charge of arrangements.

The family of Dr. Thomas Edward "Ed" McMains created this Life Tributes page to make it easy to share your memories.

Send flowers to the McMains family.