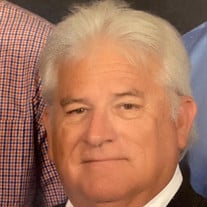 Timothy Allen “Tim” Callison, 64, passed away at University Hospital in Augusta, GA on Wednesday, March 3, 2021. He was born in Sylvania, GA, raised in the Greenhill and Four Square Baptist Churches, and was a graduate of Screven County High School, Class of 1974. Afterwards he attended Georgia Southern College and operated heavy equipment for the family business Callison Construction, a job he began as a youth. In 1980 he began driving a dump truck for Jackie B. Lovett and in 1981 he began his career with Savannah River Site. There, he was employed until his death for 40 years as an electrical and instrumentation mechanic. He was a faithful member of the First Baptist Church where he served in many capacities which included; Sunday School teacher of the Raiford Parker class, choir member, Deacon, and member of the grounds committee. He will be remembered for his love of the outdoors and strong work ethic. He was preceded in death by his father, Jake Callison. He is survived by his wife of 41 years, Tamra “Tammy” Herrington Callison of Sylvania; son, Timothy Allen Callison II of St. Petersburg, FL; daughter and son-in-law, Candace Leigh and Matthew Thomas McQuaig of Savannah; mother, Mary Brower Callison of Sylvania; sisters and brother-in-law, Jan and Kenny Austin of Sylvania, and Melanie Loyd of Bulloch County; brother and sister-in-law, Jerry and Pam Callison of Sylvania; mother-in-law, Athelon Herrington of Eden, sisters-in-law and brothers-in-law, Terri Norton of Guyton, Cliff and Lynn Herrington of Sylvania, and Laurie and Ron Tyran of Eden; and several nieces and nephews. Funeral services will be held on Saturday, March 6, 2021 at the First Baptist Church of Sylvania at 3:00pm, with Rev. Dr. Charlie Cooper officiating. For those who would like to view Mr. Callison privately, he will lie in state from 1 to 2:30pm. Due to the constraints of Covid 19 there will be limited seating in the sanctuary, additional seating and broadcasting can be observed in the Family Life Center. Services for those unable to attend may be viewed via Facebook on FBC Sylvania Georgia. Interment will follow at Screven Memorial Cemetery. Pallbearers will be Ken Austin, Cliff Herrington, Ron Tyran, Jon Weathersby, Mark Heron, Cody Hart, Jay Brinson, Russell Brower, Lee Mock, Len Mock, Todd Bazemore, and Brett Warren. Honorary pallbearers will be the members of the Raiford Parker Sunday School Class, active and inactive Deacons of First Baptist Church, and members of the Security Maintenance Group at SRS. In lieu of flowers the family asks that memorial contributions be made to Grounds Fund of the First Baptist Church, P.O. Box 318, Sylvania, GA 30467. Friends may sign the online register book at www.joineranderson.com Joiner Anderson Funeral Home Screven Chapel is in charge of all arrangements.

Timothy Allen &#8220;Tim&#8221; Callison, 64, passed away at University Hospital in Augusta, GA on Wednesday, March 3, 2021. He was born in Sylvania, GA, raised in the Greenhill and Four Square Baptist Churches, and was a graduate of Screven... View Obituary & Service Information

The family of Mr. Timothy Allen “Tim” Callison created this Life Tributes page to make it easy to share your memories.

Send flowers to the Callison family.