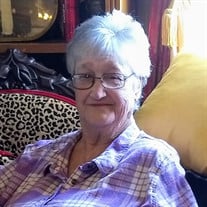 Statesboro, Georgia Vivian Ann Adams Lott departed this world for the next one just after 12:30 a.m. on August 24, 2021, after a short illness. Born on January 3, 1944, “Vivinann,” as most of her family called her, was the youngest of five children born to John Russell and Annie Bell (Hollingsworth) Adams of the Westside Community. She was preceded in death by her husband Cammie Wade (C.W.) Lott; her parents; her grandparents, William and Cornelia (Parrish) Adams and Charles and Samantha (Brannen) Hollingsworth; her elder brother and sister-in-law, Charles W. and Sue T. Adams; and her elder brother Bobbie G. Adams. Vivinann was a 1963 graduate of Statesboro High School. After graduation, she worked as a gift wrapper at McConnell’s and later at Andrews Klean Korner and Hines Dry Cleaners. She and C.W. were “set up” on a blind date by her one of her cousins who had married one of his. The couple married on June 6, 1964, and were blessed with three children. While the children were young, Vivinann was a stay-at-home mom who exemplified that title. She volunteered to help disadvantaged children practice reading and helped out at school book fairs. She baked countless batches of cookies for school parties, made holiday gifts for her children’s classmates, rounded up donations for various school carnivals, and chaperoned school trips. She made enough punch to fill the Ogeechee River and served countless plates of funnel cakes at the Kiwanis–Ogeechee Fair in order to raise funds to send the Statesboro High Chorus to perform at Carnegie Hall—all while never missing any school- or sports-related event her children were involved in and having supper on the table promptly at 4:30 p.m. every day when C.W. arrived home from work. Once Jennifer was in middle school, Vivinann returned to work during the “rush” times of the first and last weeks of classes at the University Store on Georgia Southern’s Statesboro campus until her retirement in 1995. Retirement did not slow Vivinann down. An avid reader, crafter, quilter, and gardener, she was just as likely to be caught hiding a romance novel under a seat cushion as to quickly shove an art project down beside the couch whenever an unexpected visitor arrived. She always had a pot of hot coffee or a glass of iced tea available to offer anyone who stopped by. Vivinann enjoyed being outside in the sunshine and spent hours tending to her flower beds. Her dahlias, gladioli, petunias, and hydrangeas welcomed everyone who came into her neighborhood and provided numerous “bouquets” for the neighborhood children to present to their mothers. Vivinann loved to travel. In her words, “If the wheels are turnin’, I want to go, too.” To her, the best part of travelling was the chance to “see a little different scenery” whenever, due to unexpected detours or bad map reading, her driver became slightly lost. In fact, that’s how she came to cross the Mississippi River and almost run out of gas in the “Show Me State”! An active grandmother, Vivinann drove her grandchildren around in her Smurf-blue Chevy van, dubbed “the Granny Mobile” by a teacher at Mattie Lively, until the grandkids no longer needed before- and after-school care. As her grandchildren grew older, “Grandma Vivian” could always be counted on to be there at every special event in their lives; whether supported by cane, walker, or wheelchair, Vivinann was there. She will be most remembered for her love of family and friends, happy demeanor, and her habit of waking up at 4 in the morning to start a load of laundry while loudly singing, “Oh, What a Beautiful Morning,” “In the Pines,” or any one of a number of gospel songs off key but with absolute joy. Vivinann is survived by her children, C. Wade Lott, Jr., Carol L. (Michael) Waller, and Jennifer L. (Eric) Hendrix; her grandchildren Samantha A. (Ryan Hart) Waller, Brian M. Waller, and Sara K. Hendrix; her brother Edwin (Linda) Adams; her sister Martha Faye (Dan) Foglio; the sister in her heart Betty A. Hinton; her “adopted” daughter and grandson, Kay and Alfred Tanno; and numerous nieces, nephews, cousins, and friends. She will be interred next to C.W. in the Upper Mill Creek Church Cemetery. Once the pandemic is over and it is safe to gather, a memorial service will be held, outside, as Vivinann requested. Until then, the family requests that you keep your favorite memories to mind to share at that future gathering. In the meantime, wear your masks, get vaccinated, and stay safe. Friends may sign the online register book at www.joineranderson.com. Joiner-Anderson Funeral Home & Crematory in Statesboro is in charge of arrangements.

The family of Mrs. Vivian Ann Adams Lott created this Life Tributes page to make it easy to share your memories.

Send flowers to the Lott family.