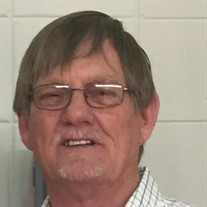 Wade Ward, age 75, passed away on Sunday, August 29, 2021, at University Hospital in Augusta, GA. He was born on October 11, 1945 in Sylvania, GA as the ninth child to Charlie Ausier and Sara Alice Forehand Ward. Wade worked on the family dairy farm in Screven County until enlisting in the Navy at the age of eighteen. In the Navy he served during the Vietnam War aboard the USS Constellation as a Communication Specialist. He received the National Defense Service Medal and the Vietnam Service Medal with a Bronze Star. After completing his military service, Wade specialized in Office Machine Sales and repairs as the owner of the Wade Ward Company. Along with owning his own business he also worked at the Savannah River Site, where he retired after seventeen and a half years. Wade came from a family with a strong Christian background that molded his steadfast faith in God and strong work ethic. He portrayed these qualities in his business and personal life. His testimony of genuine love of others and servanthood was seen in his business relationships. Many friendships and most of all in his family. He enjoyed fishing on the river bank, collecting antiques and making homemade syrup and his church, Red Bluff Baptist Church. However, he enjoyed being a Granddaddy the most, to his four beloved grandchildren. He was preceded in death by his parents, Charlie and Sara Alice Ward, his sister, Barbara Wiggins, and five brothers; Royce, Russell, Clifton, Ronnie and David Ward, also brothers-in-law; Brannen Wiggins, Bob Norris, and sisters-in-law; Anita Ward and Patricia Ward. He is survived by his daughter, Tammi (William) Sutton, son, Eric (Wendy) Ward, and grandchildren; Bailee and Chandler Sutton, and Savannah and Austin Ward, brothers, Wallace (Allie) Ward and Tommy (Jean) Ward, and sisters; Martha Norris, Donna (Lloyd) Wiggins and Karen (Earl) Hulet, sister-in-law, Susie Ward, and many nieces and nephews. Graveside services will be held at McDonald Baptist Church in Sylvania, GA on Thursday, September 2, 2021 at 11:00am with Pastor Danny Jenkins officiating and military honors. In lieu of flowers the family asks for memorial contributions to the Red Bluff Baptist Church, 2314 Red Bluff Rd., Sylvania, GA 30467. Pallbearers will be nephews; Greg Wiggins, Curtis Peterson, Matt Ward, Nick Ward, John Ward, and Joel Ward, and Tim Logan. Honorary pallbearers will be all past and present members of the Wall’s Coffee Club, Ink Boy employees, Ray Lariscy, Virgil Arnett, Bob McBride, Mary Joyce Morgan, Boykin Stuart, Willene Walls, and Jerry Shannon. Friends may sign the online register book at www.joineranderson.com Joiner Anderson Funeral Home Screven Chapel is in charge of all arrangements.

Wade Ward, age 75, passed away on Sunday, August 29, 2021, at University Hospital in Augusta, GA. He was born on October 11, 1945 in Sylvania, GA as the ninth child to Charlie Ausier and Sara Alice Forehand Ward. Wade worked on the family dairy... View Obituary & Service Information

The family of Mr. Wade Hampton Ward created this Life Tributes page to make it easy to share your memories.

Send flowers to the Ward family.